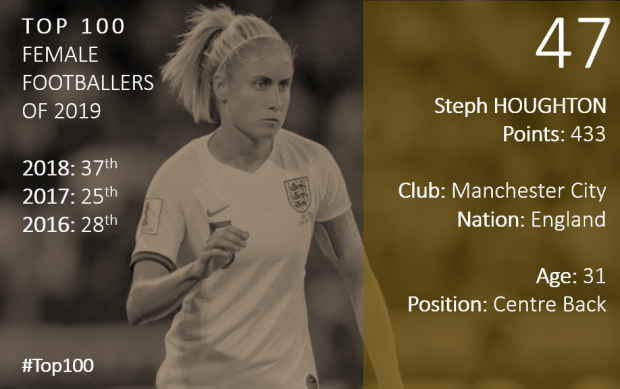 The first half of the year was a good one for the Manchester City and England captain. She led her club to a domestic cup double and scored a memorable free-kick against the USA as she got her hands on silverware with England at the SheBelieves Cup. She would almost duplicate her attempt against the USA when England beat Cameroon at the summer’s World Cup as Houghton propped up a defence that kept four clean sheets in a row on the way to the semi-finals. Unfortunately, a late penalty miss was the resounding memory of the World Cup and not one Houghton deserved. She’s returned to Man City and enjoyed a relatively solid start to the season as she looks to add more silverware and possibly an Olympic medal to her CV in 2020.

“I think Steph’s best attribute is her dedication and her desire to be successful individually and collectively for the team. She consistently shows she is the complete defender, whether it’s defending against small, quick strikers or strikes who want to battle and fight. She’s good aerially, she’s good on the ball and she’s almost a midfield player playing as a defender, her passing range is incredible. She has driven this team on and in 2019 she showed incredible leadership and to get her performance levels sky high. She led England to a semi-final and to step up and take that penalty under that pressure showed incredible leadership skills.”