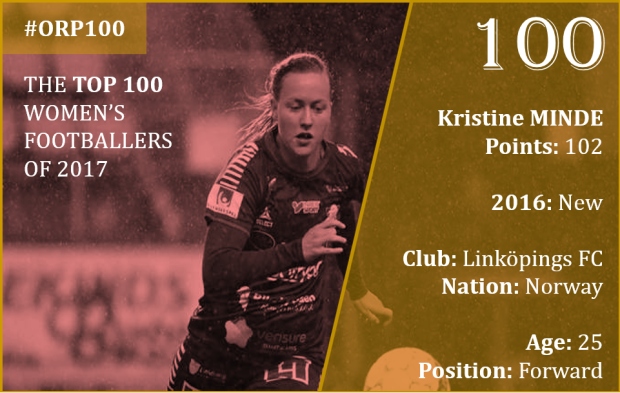 Whilst former Chelsea forward Marija Banusic may have taken the top scorer honours for Linköpings in Sweden this season, Norwegian international Kristine Minde was at her influential best to help her side defend the Damallsvenskan title in 2017.

Her year internationally with Norway ended in disappointed at Euro 2017, but Minde started the year by scoring in their opening match against Sweden in La Manga, and ended it by helping Linköpings qualify for the Champions League quarter-finals with a goal against Sparta Prague.

Such is Minde’s work ethic and quality on the pitch, the 25-year-old has earned herself a move to Bundesliga champions Wolfsburg, along with team mate Claudia Neto, and joins her new side this month in search of Champions League glory.

Her contribution towards Linköpings’ title win was so important that she was voted by the fans as the club’s player of the year for 2017. A fond farewell.

“Kristine is one of the fastest players in women’s football. Her work rate is tremendous, she can play in every position and she can do this at the highest level. Add a great attitude on top of that and you have Kristine Minde!