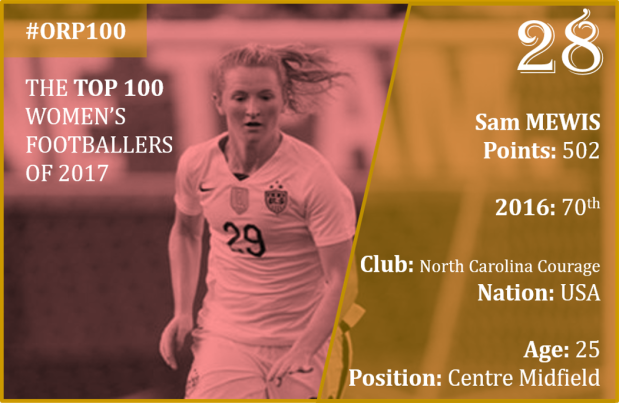 Arguably the best USA midfielder around at the moment, 2017 was another virtuoso year for a player now reaching her peak in the game.

Six goals and three assists meant she made a considerable contribution, proven by the fact she was named in four of the six Team of the Month’s for the 2017 season.

Mewis was named in the end of season Best XI and also chipped in for the USWNT, scoring against Brazil before hitting a brace in a friendly against South Korea.

“Sam has tremendous passing range, wins balls in midfield, can score goals and can set players up. She covers a ton of ground in the midfield and has shown good leadership as a young player.”

“Having played with Sam for the past 3 years, I have gotten to see her transform into an amazingly mature and dedicated leader on and off the field. Sam is a play-maker and on top of that she is the most selfless teammate I have ever had. She’s constantly pushing herself to get better and to have a deeper understanding of the game. It is no surprise to me that she has continued to have an outstanding run with the USWNT and I will not be surprised the day she takes over as captain of that team.”

“Mewis came of age this year and not only helped her North Carolina Courage side reach an NWSL Championship Final, but also grew her influence on the national team. She scored six goals and had three assists for her club as they won the NWSL Shield in the regular season, while for the USWNT, she started all 16 games in 2017.

“Mewis is competing for a spot in one of the most competitive areas of the field for the US, but in 2017, she showed why she has become one of the team’s key players.”