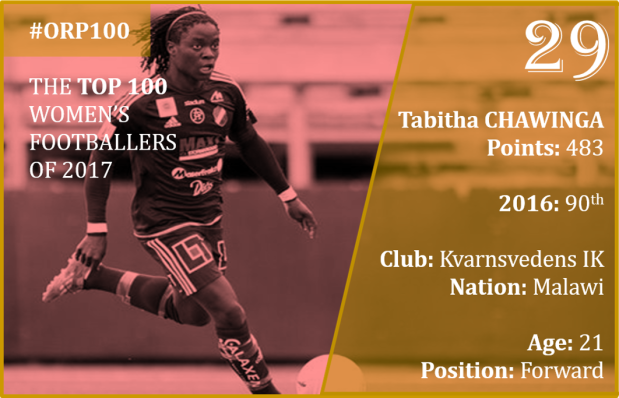 When discussing the best strikers in world football, very few people would mention Malawi’s Tabitha Chawinga, but they really should be.

At just 21, Chawinga perhaps doesn’t have the exposure in Sweden with mid-table Kvarnsvedens IK, but that may change next year with a move to Chinese side Jiangsu Suning, now under former Lyon manager Gérard Prêcheur.

Chawinga scored an incredible 25 goals during the 2017 Damallsvenskan season, 12 more than next best Linda Sällström. It was a tally 12 ahead of FC Rosengård’s top scorer Ella Masar and 14 ahead of Marija Banusic, top scorer for champions Linköpings.

Chawinga also won goal of the week four times, showing she not only scores plenty, she does it in style. With so many years ahead of her, many are wondering just how far she can go.

“I have only been with Kvarnsvedens IK for a few months, but in that short time I believe Tabitha is among the best players I have seen – she is so dynamic. She has speed and strength and an incredible ability to consistently put the ball in the back of the net. The crazy part is it’s all raw natural talent at this point. She is an incredible player but still has so much to learn, which means she can only get better. Playing against her everyday in practice has made me a better player and I have no doubt that she will be one of the best in the world. She is still so young with so much soccer ahead of her but I can’t wait to see where she goes from here.”

“Tabitha is one of the kindest people I have ever met. She is humble and grateful for everything she has been able to do. She has unmatched quickness and speed both on and off the ball, and has the ability to go one v one with not only the best defenders in the world, but taking on whole defenses on her own at a time. She has an amazing left foot that can score from any angle.”

“Tabitha Chawinga has set the Damallsvenskan alight (again) this season. The 21-year-old Malawian forward scored a sensational 26 goals in 22 league matches for a team that was eventually relegated, which was 11 goals more than the next player in the league. She almost makes it look easy, and there’s not a defender who doesn’t dread going up against her. She deservedly won forward of the year in Sweden.”