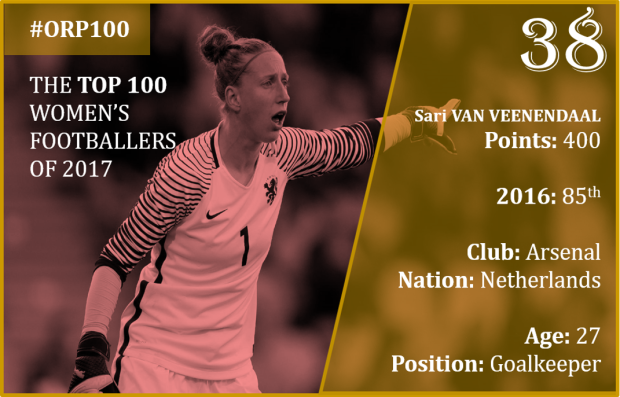 Many people didn’t know a great deal about Sari van Veenendaal until she rocked up at Arsenal a couple of years ago, but the Netherlands No.1 has since confirmed her spot as one of the best goalkeepers in the world.

Van Veenendaal was between the sticks as Arsenal went unbeaten in the 2017 Spring Series, but much better was set to follow for the 27-year-old in the summer.

The ‘keeper only conceded one goal as her and her team mates marched towards the final, where she was beaten twice in an enthralling finale.

But the Dutch won out and Van Veenendaal was unsurprisingly voted into the Team of the Tournament for her role in their momentous victory.

“When Sari is my goalkeeper, I always feel safe. She radiates calm and makes other players better. Besides this she is probably the best penalty saver, she performs very well, has amazing reflexes and makes amazing saves.”

“She developed so much in the last few years, since she made her move to Arsenal. She’s a great goalkeeper on her line and she’s good in the air.”