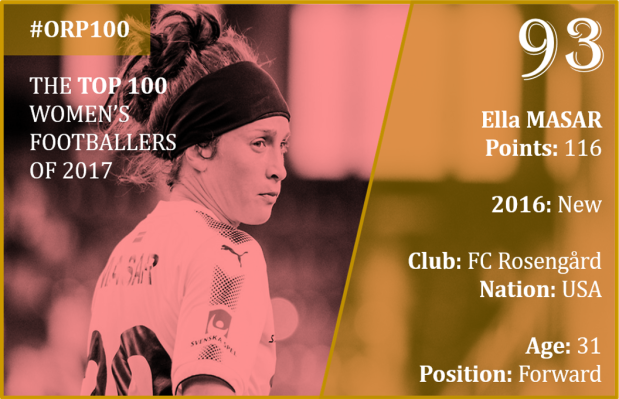 Almost as soon as USA forward Ella Masar moved into her thirties last year, the experienced FC Rosengård player had to take on extra responsibility in Sweden this year after the departures of Marta and Lieke Martens.

Whilst her side trailed Linköpings over the course of the season, Masar’s 13 league goals constantly kept FC Rosengård in the chase, but it’s been incredible eight years since the hard working forward made her one and only appearance for the USA.

With Masar announcing she will be moving on to one of Europe’s elite for 2018 and an intention to possibly represent Canada at the 2019 World Cup, her form in 2017 was a good reminder of what a talented player Masar is on her day.

Her 13 goal haul in the Damallsvenskan saw her only outscored across 2017 by Linda Sallstrom and Tabitha Chawinga.

“She came and joined us quite deep into her career, she came and trained with the team for us to see how good she was. I was impressed watching her train, she was a really good finisher, whether it was her right foot or left foot.

“She can play defence too, but I could see she was a very good attacker. Ella always thinks she can win the game, she works so hard for the team, but I don’t think she fully believed in herself at the beginning. She’s grown on the pitch over the last few years and she’s a very good player, she can keep the ball, she can run in behind the defence and she’s a good finisher. Ella had all the aspects to be a good No.9.”

“I played with Ella in Chicago and unfortunately because the game isn’t as accessible around the world, people don’t have an opinion on players like Ella. She came to Damallsvenskan and proved that not only she has a great work ethic, she’s a fighter and works hard for her team.

“She’s a good leader, she scores goals and she’s versatile. She’s demonstrated that and when you’ve been playing with someone long enough, you know that already, but I think it opened it up to everybody else to finally recognise what a good player Ella is.”