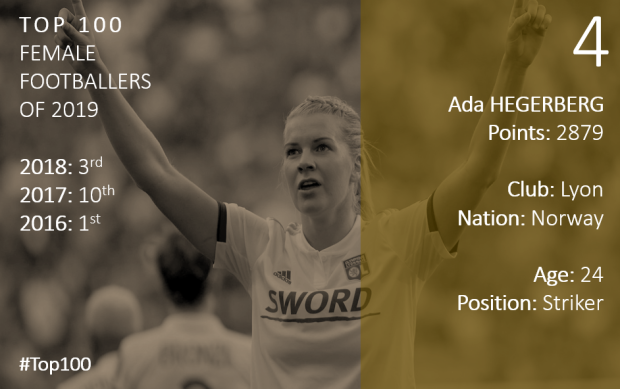 Hegerberg drops out of the top three in a year where the World Cup had a big bearing on the ranking, so to be fourth after missing the tournament shows just how good the striker is and how highly thought of Hegerberg is around the world. Hegerberg has a staggering 20 goals in 14 games across all competitions for Lyon already this season at the time of writingH, possessing an almost unique ability to score freely with either foot, her head or create chances for herself and others. She has two hat-tricks and five braces to her name since the season kicked off again in August and has won everything there is to win once more. Her highlight was the Champions League final, where an incredible 16-minute hat-trick in the first half an hour devastated Barcelona and sealed a third European trophy in a row for the all-conquering Lyon. A true star, Hegerberg continues to get better and better.

“Her and Eugenie are so good together, they play off each other and it’s a joy to watch. I used to call them the twins because they have just have this connection which makes both of them kind of great. I think Ada needs Eugenie but you can’t take anything away from her because she shows up in big games and she makes a difference. I’ll say this, when Ada wasn’t on the pitch we struggled to convert, but when Ada was on you couldn’t touch Lyon. Anything that came anywhere near her would be a goal, even out of nothing. We played Wolfsburg away from home and I think it’s the best I’ve seen her and she didn’t even score, she was unplayable. There’s only ever a few games you see that but you see how good she is. That gets overlooked, when big games come, that’s when she’s really on it. It’s hard to do that all the time when you play teams who aren’t going to test you but she will score when it matters, time and time and time and time again.”