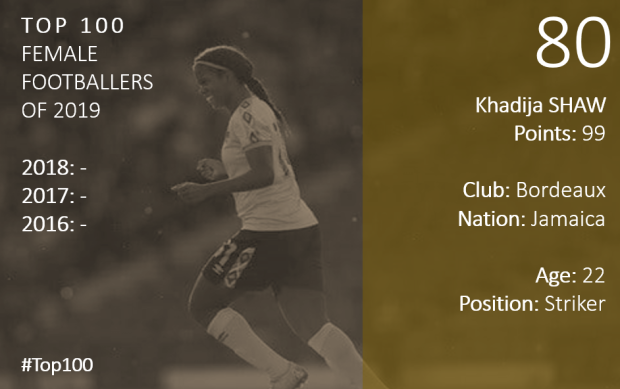 It may be the first time 22-year-old Shaw features in this list but it certainly won’t be the last. There was plenty of talk about Shaw being the exciting new talent ahead of the World Cup and while Jamaica struggled to impress in a tough group, Shaw’s talent was evident. She scored four goals in two games during Jamaica’s warm-up friendlies and since going professional in Division 1 Feminine with Bordeaux, Shaw has rarely looked back. Nine goals already this season leave her trailing only Ada Hegerberg in the scoring charts and it does appear the world is really at her feet at just 22.

“Khadija continues to develop to be one of the top forwards in the world. Her success in the French league shows that she can play against some of the top club teams in the world. Tactically/technically she continues to improve and she combines all these attributes with her power and speed which makes it very difficult to contain her.”