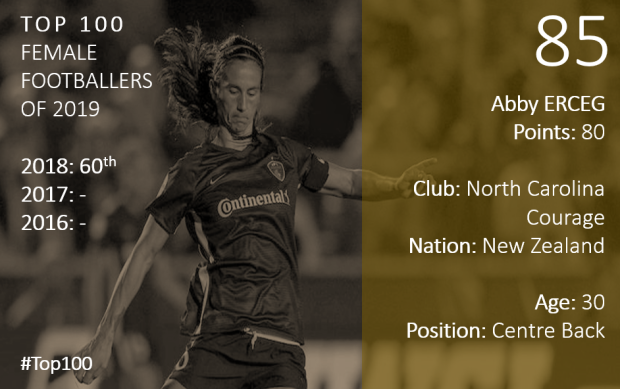 Captaining her club to a second consecutive NWSL championship says all you need to know about Abby Erceg. An absolute rock at the back and one of the most motivational captains around, Erceg is probably underrated compared to the top names playing for a national side that doesn’t often challenge the top sides, but her partnership at club level with Abby Dahlkemper has often been inpenetrable. Her defensive stats for the NWSL season tell their own story but aside from being a solid defender, Erceg is comfortable playing out from the back. She couldn’t help her national team avoid three defeats from three at the World Cup but that’s no slight on what has been another solid year for her personally.

“Abby is a tough, no nonsense stalwart whose leadership qualities are phenomenal. Her technical game continues to evolve and has made her one of the best centre backs in the world. Kiwi’s reading of the game combined with her tactical IQ and tackling ability make her extremely difficult to beat.”