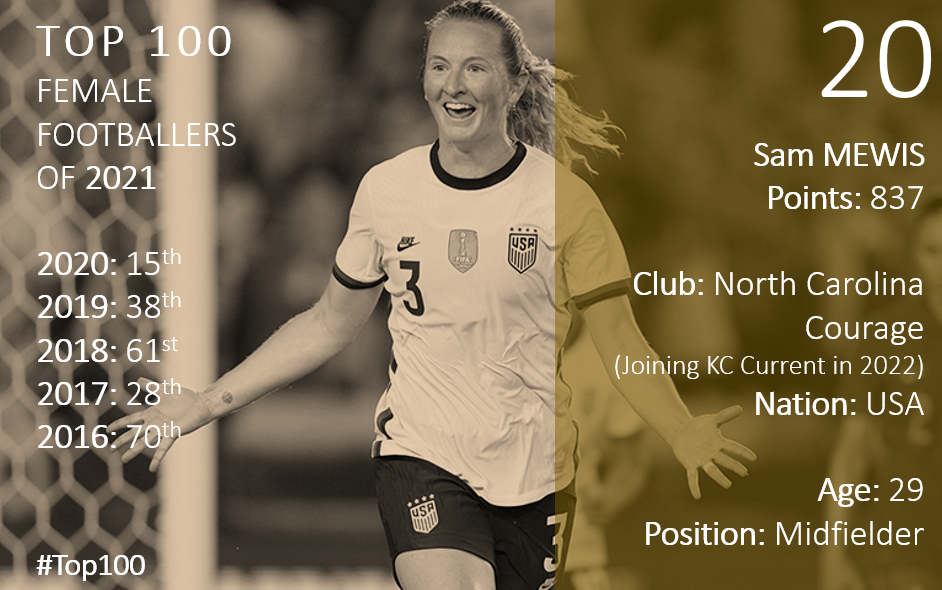 Mewis’s highlights largely came in the first half of the year, starting with her opener in the FA Cup final with a trademark header. Mewis went on to end her season in Manchester as one of the best in the league and her five goals in Europe made her joint-second in the rankings. Six goals through the year for the USA, including one at the Olympics, was a solid return for a player who sadly missed much of the second half of 2021 after requiring surgery upon returning to North Carolina.

Six goals in eight WSL appearances this season at the time of writing suggests Little has no appetite for slowing down anytime soon. She has appeared rejuvenated under the new Arsenal manager, Jonas Eidevall, and showed her talent on the world stage representing Team GB over the summer, where she slotted into a side made up of primarily English players as if she had been with them all her life. There are still very few who display the game intelligence Little does and she is now right back in the goals too. 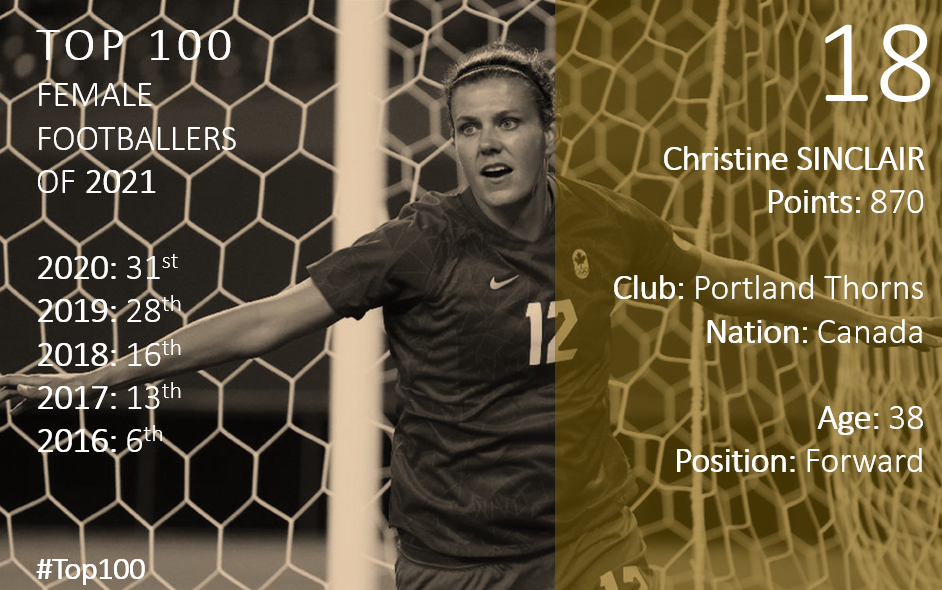 No one could begrudge the great Christine Sinclair finally winning gold with her country in Tokyo during the summer. The 38-year-old has been a mainstay for Canada for so long now and finally got her hands on a gold medal at perhaps the final time of asking. She also helped Portland Thorns to the NWSL Shield in what has been a successful year on a personal level for the great forward, who consistently chipped in with goals and assists for her club. 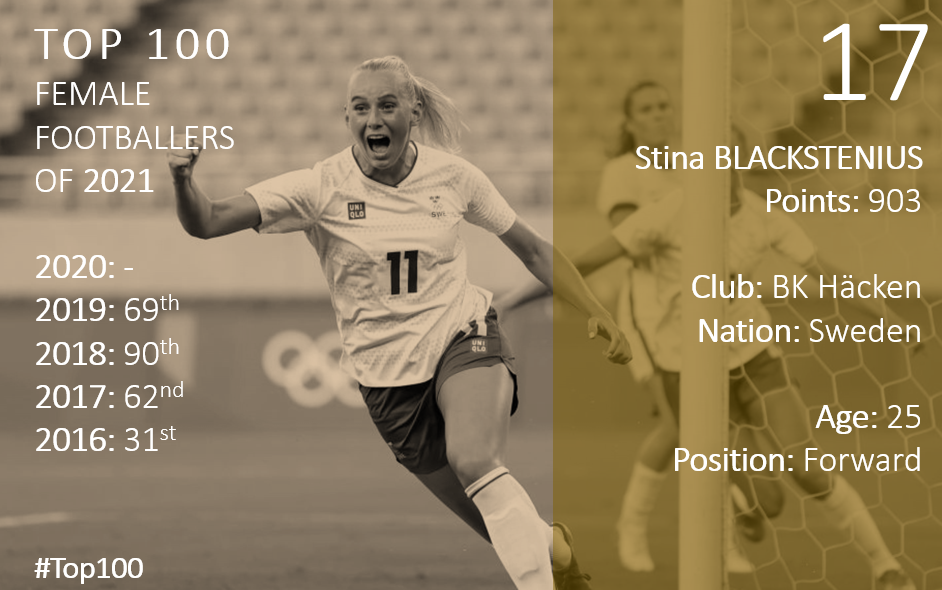 Not for the first time, Blackstenius came alive at the Olympics, surpassing the breakout tournament she enjoyed in Rio in 2016. Her two-goal display in an opening win against the USA was a huge moment for the striker and she followed that up with three more goals, including one against Canada in the final. Blackstenius is fast becoming one of the most well-rounded forwards in the game and she scored an impressive 17 goals in 21 games for BK Hacken in this year’s Damallsvenskan.

It was another impressive year for a defender who has become one of the best in the world. Whether it’s her ability to play out from the back or help her team keep clean sheets, Mapi has it all and her new partnership with international teammate Irene Paredes at Barcelona has only helped Europe’s top club to new heights. Her consistent performances at the heart of the defence helped her side to a historic treble in 2021 and at 26 there’s time for Mapi to get even better. 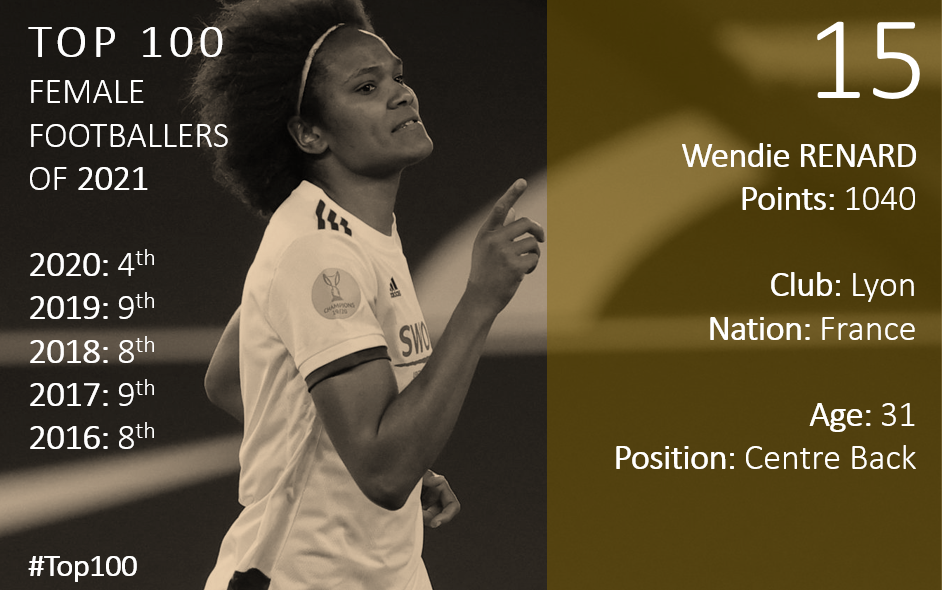 The Lyon and France leader continues to be one of the most imposing defenders in the game but drops out of our top 10 in 2021. Renard started the year on an incredible run of scoring in five consecutive games and there are few players anywhere who offer the aerial threat of the centre-back. Lyon did not enjoy their usual success this year but Renard forged a fine partnership with Kadeisha Buchanan in the continued absence of Griedge Mbock and overall enjoyed another solid calendar year. 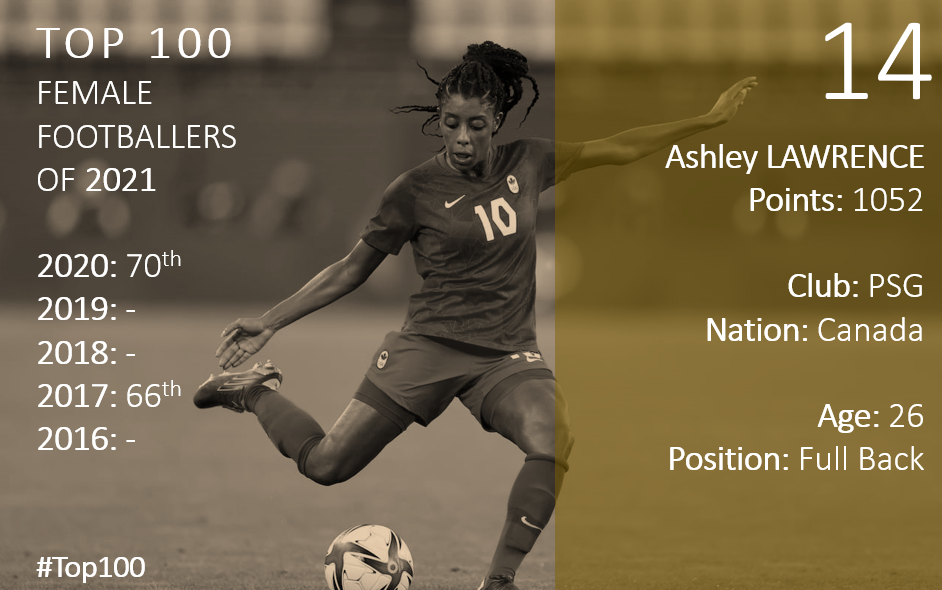 What a year at both domestic and international level for a player who has perhaps gone under the radar in the past, but not this year as Lawrence flies up the rankings for 2021. Whether it’s been at left-back, centre-back or in midfield, Lawrence’s versatility is only one trait that stands her apart, but her ability to shine in all of them means it’s no coincidence she won major tournaments with both PSG and Canada this year. Topping Lyon domestically was followed up with a gold medal in Tokyo.

Katoto is well on her way to becoming one of the best strikers in the world at the age of only 23. Katoto took her game up another level in 2021 and not only has the stats but now the silverware to show for it. Her 21 goals come the end of last season saw her well clear of anyone else (other than Khadija Shaw) in Division 1 Arkema and played a huge part in PSG finally prising away the league title from Lyon. Katoto has become the attack leader for both PSG and France, already leads the scoring charts domestically this season and has nine goals in France’s first six World Cup qualifiers.

The Lyon and Chile player reaffirmed her status as the best goalkeeper in the world and her position in the top 100 this year backs it up. Her rock-solid presence between the posts helped PSG to a historic league title. Her last-minute save that knocked Lyon out of the Champions League was one of the most important saves of the year from any goalkeeper and big performances have become standard now for someone who has established herself as the No 1 of No 1s in recent years. 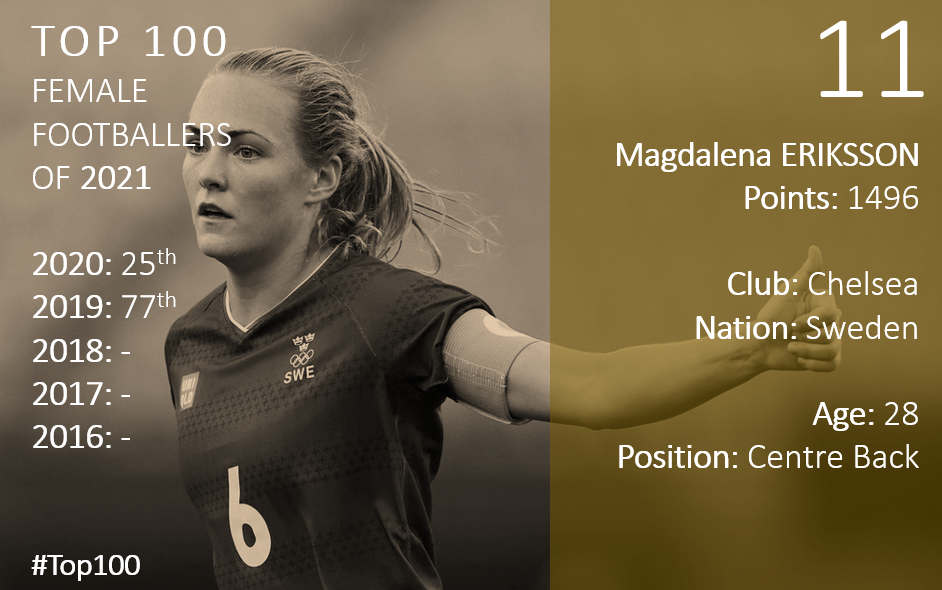 The influential Chelsea captain led her side through another successful year on the pitch. The 28-year-old has become one of the ultimate modern defenders, with an ability to play out from the back while remaining a solid presence at the heart of the defence for both Chelsea and Sweden. Her 2021 was full of success, as she took home Continental Cup and Women’s Super League medals, as well as winning a silver medal with Sweden and it could have easily been gold to go with her domestic triumphs.