McCabe is one of the highest new entrants in the 100 this year but also one of the most deserved as she has progressed into one of the best attacking full-backs in the game. Her four goals in eight league games so far this season has already matched her tally for the last campaign, while she also has three in four for her country in World Cup qualifying. At 26, she is emerging as a real leader for both club and country but it’s her numbers that set her apart given she is well into double figures for assists across 2021.

Weir went from strength to strength this year and another rise in the rankings backs that up. The Scotland international found the net 18 times from her midfield role through 2021 for club and country and was also a Fifa Best nominee for her superb strike against Manchester United back in February, the second time in a row she’s been nominated for a goal in a derby. Her skill, vision and eye for a world-class strike has made Weir one of the most potent attacking midfielders in the WSL.

Press was in fine form at the start of the year, enjoying a good end to her time with Manchester United with several goals towards the end of the 2020-21 WSL season in England. Five goals for the USA followed, plus another in the Tokyo Olympics as Press continued to be one of the leading attacking threats under Vlatko Andonovski this year. Between opting out of subsequent national team camps and signing for new NWSL franchise Angel City, Press hasn’t featured since Tokyo. 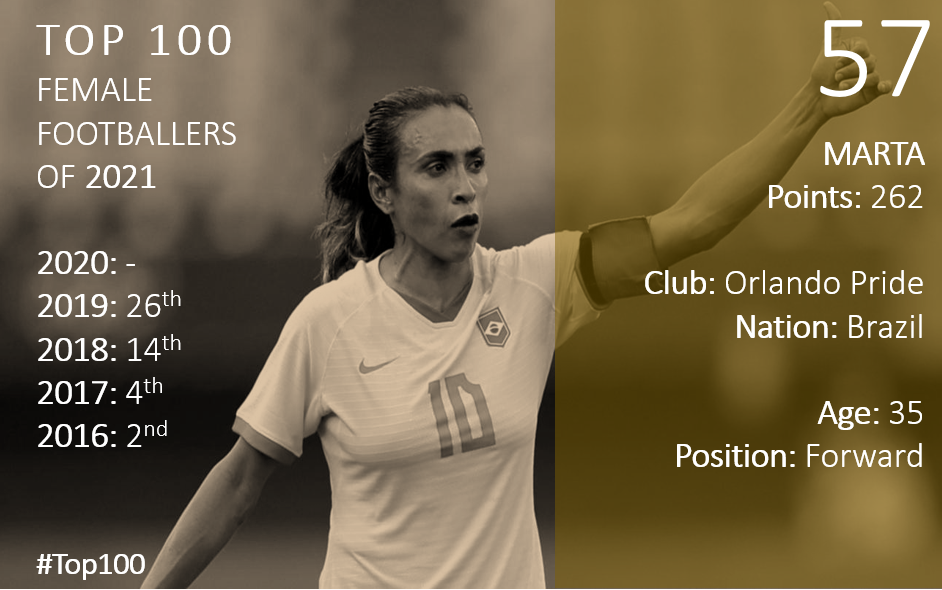 One of the all-time greats gave a few reminders this year that she’s not done yet. At 35, Marta found the net four times for Orlando Pride in what was another tough season for the NWSL side, but Marta was often at the heart of their attacking play. She also remained a key component of the Brazil national team, particularly in Tokyo where she scored three times during the Olympics and showed the world what she still has to offer. Rumours of a move back to Brazil would be a loss to the NWSL but Marta remains one of the finest with a ball at her feet.

Cascarino drops down from last year but that only goes to show how well she stood out in 2020 after another solid year in 2021. Cascarino continued to be a big attacking threat for Lyon, ending last season with seven assists in the league. The France international has forged a solid partnership with Ellie Carpenter down the right for Lyon, the latter’s ability to get forward allowing Cascarino to often come inside and influence play across the pitch. Always with an eye for a goal, she remains a key player for Lyon and France.

Shaw made the big move anticipated this year, leaving Bordeaux and choosing WSL side Manchester City during the summer, but her slight drop from 2020 possibly emphasises she is still settling into life with a struggling City team this season. Shaw ended last season as the top scorer in the French league, no easy feat when not playing for either Lyon or PSG but only proving her ridiculous eye for goal and clinical finishing ability. Only two league goals so far for City but a hat-trick in the FA Cup showed her ruthless side and there’s no doubt it will click sooner rather than later given her natural ability. 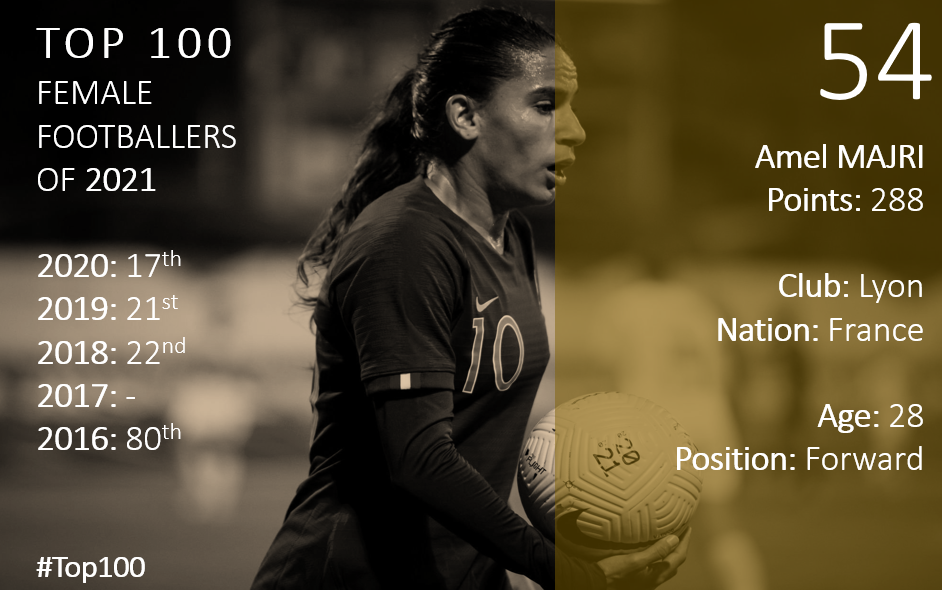 Majri ended last season with 10 goals after the arrival of Sakina Karchaoui at Lyon finally allowed her to play further forward rather than at left-back on a regular basis. Majri has enjoyed a solid year but drops from last year when her numbers were ridiculously high, though she is still influencing games for Lyon and has two goals and three assists in the league early on in the new campaign. Her ability and technique on the ball still makes her one of the very best left-sided players in the women’s game. 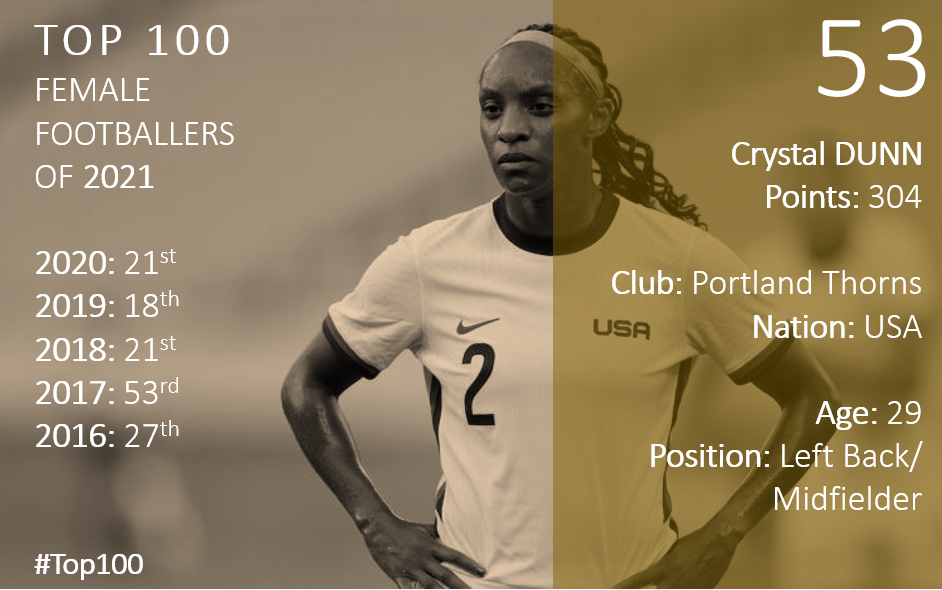 Dunn drops down the list this year but still showed her quality after a busy year which saw her once again play regularly for her country and Portland Thorns in a range of positions. Dunn’s all-action, energetic style – particularly as a full-back in the national team – and her ability to perform in several different positions has always been one key element of what makes her a special player.

Rapinoe returns to the list this year and, as ever, popped up at big moments for both her club and country in 2021. Domestically she was in fine form for OL Reign post-Olympics, ending the season with the best goal/assists rate per 90 minutes in the league, her goals against Portland Thorns of particular importance. Rapinoe also hit double figures for the USWNT in 2021, and again came to prominence in the bronze-medal match against Australia, her two early strikes putting the USA on the road to another medal.

Despite a stop-start year affected by several injuries, Heath featured regularly when fit and was in top form when her first injury hit at Christmas, scoring and assisting regularly for Manchester United with a stunning Manchester derby strike a particular highlight. She didn’t return until the summer but did so with two goals in two games for her national team and a regular role in Tokyo before joining the club she supported as a child, Arsenal. The 33-year-old enjoyed a good start in London, registering several assists and scoring her first goal in the Champions League before another injury hit last month.