Dulwich Hamlet will be celebrating International Women’s Day on Saturday. I’ve been going to Champion Hill for 20 years, and have always been made to feel welcome by the club staff and fellow fans. So I was particularly pleased to hear that the club have agreed to provide free tickets to women’s and girls’ football teams. It’s a really great initiative from the club, which is always seeking ways to work with the community and encourage more fans to Champion Hill.

The free ticket offer has caused me to reflect on my own footballing life. My love affair with the beautiful game started at school. In the Seventies, sport options for girls were restricted to netball, so I was reduced to begging the boys to join in their lunchtime football games. I was grudgingly allowed, but only if I played in goal. The playground tarmac was a little hard on the knees, but it was better than nothing.

I didn’t really get the opportunity to develop this interest through my teenage years. I had to wait until my mid-twenties for the dream to become a reality. A group of like-minded female friends decided to set up our own football team and the gloriously named ‘Camberwell Old Fallopians WFC’ was born. We blagged our shirts from Fisher Athletic FC, registered ourselves with the WFA, and after a few weeks of intense ‘training’ in the park, entered ourselves for a women’s five-a-side competition. It would be fair to say our record in that competition could have been better – we lost every match and only scored one goal – which was memorable for ricocheting off my sister’s face into the net. 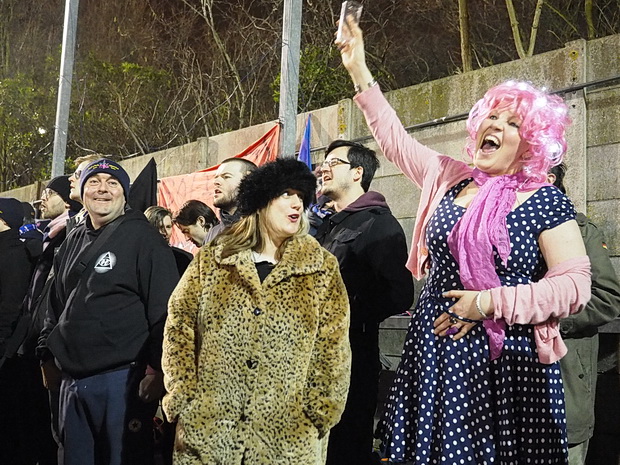 The crowd at Dulwich Hamlet is renowned for its open-minded vibe. Photo credit Mike Urban.

We had a couple of women who had played football before, but most of us were complete beginners. This was quite starkly reflected in our results, which kept us firmly rooted to the bottom of the WFA London Regional League, 4th Division. I played left midfield, and discovered I was left-footed. Due to a lack of female role models, I aspired to be Bryan Robson, but my ‘enforcer’ role often had me compared to Vinnie Jones . . . Charming!

What we lacked in skill, we made up for in passion and humour. We even had a loyal bunch of supporters; admittedly, not quite the 45,000 that watched England Women play Germany at Wembley last November – but we were proud to have our followers all the same. The supporters could be regularly heard yelling “Up the Tubes” from the touchline. The club crest was a pair of fallopian tubes with footballs instead of eggs. We were even on TV once upon a time – the interviewer that day was Pat Nevin for a football magazine programme called ‘Standing Room Only’. 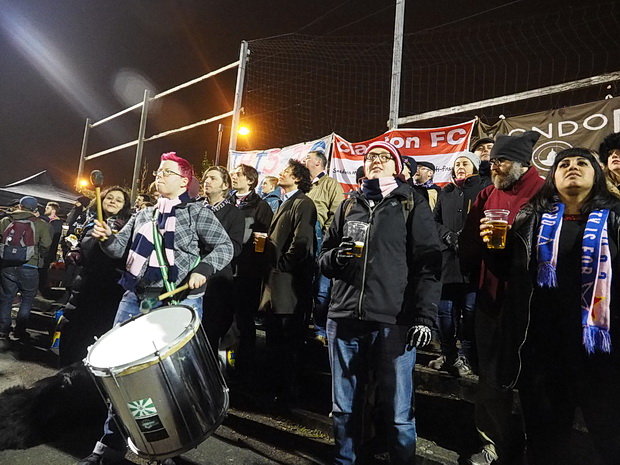 The carnival atmosphere behind the goal is clear to see. Photo credit Mike Urban.

It’s 20 years since I’ve hung up my boots, and Dulwich Hamlet – south London’s finest football team – now fills the football-shaped hole in my life. Women and girls form an increasingly large proportion of the crowd, and the carnival atmosphere behind the goal is legendary: colourful flags, glittery voodoo sticks, inflatable giraffes and the occasional conga. The football is pretty sensational, too, with passing and attacking football being the Hamlet way. It’s also a relief not to have to put up with the sexist chanting that is sadly still prevalent at many league grounds. Hamlet fans have stamped out sexist chants, and have even revised some songs with amusing lyrics that everyone can sing along to.

So, if you are looking for a novel way to celebrate International Women’s Day, or are keen to watch a good standard of football in a welcoming environment, then come and join the pink & blue army and I at Champion Hill. I can promise you that you won’t regret it.

2 Comments on Up the tubes at Dulwich Hamlet