After the midweek Carabao Cup action the Premier League returns this weekend. Once again it is time to pick through the fixtures to try and find a winning formula for your fantasy football team.

With Liverpool and Chelsea clashing at Stamford Bridge, FPL managers face the reality that in some cases 4 or 5 of their players will be involved in the same match. Where else can you look for points? Here are some ideas…

Pep Guardiola is a nightmare for fantasy football managers everywhere. Aguero netted his fourth goal of the season last weekend, to the delight of the 52% of FPL managers who own him, but he was withdrawn on 60 minutes, curtailing the chance to add to his first half strike. It’s infuriating that he then went on to not feature at all in the League Cup win at Oxford – excatly what is he being rested for? We’ll forgive Pep seeing as Aguero had an ankle complaint the previous week and if nothing else, it surely guarantees Aguero will start at home to Brighton on Saturday and you’d have to back him to net once again.

He’s my captaincy choice this weekend but as ever there’s a Pep disclaimer – whether Aguero plays the whole match I’m really not sure as Man City will be heading to Germany to face Hoffenheim on Tuesday in the Champions League. Hopefully he gets the damage done in whatever minutes he is afforded as it’s a headache none of us need.

Is it time to start considering Harry Kane? There’s no doubt he’s played somewhat of a different role so far this season, being noticeably deeper to allow Lucas Moura to run in behind, but there were signs of recovery against Brighton last weekend. Sure, Kane’s goal came from a penalty, but a goal is a goal and with the attacking talent at Spurs’ disposal you’d expect them to put Huddersfield to the sword this weekend.

The way the bonus points system works, Kane is always in with a good chance of getting some if he scores as most of his shots at least hit the target, which works in his favour in BPS land. After Huddersfield away, it’s Cardiff at home and then a trip to West Ham. We should really see just how tired Kane is after those three games.

How do you solve a problem like Everton? After scoring three in his first two games, everybody was on the Richarlison bandwagon before his red card away to Bournemouth in GW3. That prompted a huge offload of the Brazilian who has gone on to be capped by Brazil in his time suspended. Everton haven’t fared particularly well in his absence and the need for a striker is more apparent by the week. Richarlison however looked the most likely to provide that spark at the Emirates in his first game back and with Fulham the visitors to Goodison Park this weekend, there will be ample opportunities at both ends.

At just £6.6m for a midfield player who more or less plays as a forward it’s a good move to get him in. Everton’s fixtures continue to be reasonable and I’m predicting that price is only going to go up. It’s time to forgive and forget if you were scourned by that red card, I’m sure he is very sorry.

We’re starting to get more clues as to how Unai Emery wants his teams to play and it looks like Lacazette has nailed down the central striking role, albeit in a very fluid system that also involves Aubameyang, Ramsey and Ozil running wild. Since earning a spot in the starting lineup Lacazette has completed 90 minutes on three consecutive occasions, something Aubameyang can’t claim whilst Ramsey and Ozil have had their share of problems over the years, whether it be injury or just not being effective.

Lacazette has contributed two goals and three assists so far this season (plus a Carabao Cup strike on Wednesday), his goal against Everton was a thing of beauty and suggests he is full of confidence. Arsenal are at home to Watford this weekend before facing Fulham, Leicester and Crystal Palace over the next three game weeks – I’ve been banging this drum for a while but it’s a good time to get Arsenal attackers in before their prices rise.

This is a bit of a left field pick but for those of you with the need for a budget defender, Doherty could be just the man. It’s impossible not to have been impressed by Wolves so far this season and I’ve been praising the virtues of attacking full backs as FPL picks all season. So whilst Alonso and Robertson are going head to head, Doherty has proven quite adept at getting forwards himself so far down the Wolves right. He only has one assist so far, but I was impressed by how often he was in the Burnley final third and I really expect Wolves to beat Southampton at Molineux. Of course if nothing else they might be a good bet for a clean sheet, his primary usage, but if he can pop up with a goal or an assist too it could be an inspired signing for game week 7.

In the Offside Rule Pod league, Bola Itu Bundar return to the top of the table after an excellent score of 75 – the average was 52 but Fakhrul was able to smash that target thanks to four clean sheet and goals from captain Salah, Maddison, Mitrovic and captain Aguero. 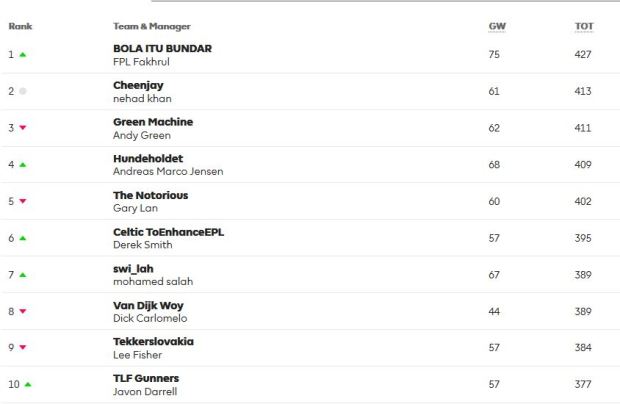 That’s all for this week but I’ll be back next week with the week 8 preview. Good luck!