The Premier League returns from International duty this weekend and that means fantasy football managers have some decisions to make. We take a look at which players could make an impact in game week 9.

It seems with every passing day another FPL stalwart has gone down with an injury. Zaha, Salah, Mane, Fraser and Trippier are just 5 of the players carrying knocks and it’ll be interesting to see how many of them recover in time to feature this weekend – though none have been definitively ruled out at the moment. With Chelsea and Man Utd clashing on Saturday lunch time and Spurs facing a tricky looking trip to West Ham some of the usual FPL highlights don’t look so bright this week.

Here are five to consider this weekend:

In times of trouble, latch on to an old favourite. Aguero has five goals this season and four of them have come at home so the visit of Burnley this weekend should have Aguero owners very interested. With all the uncertainty over Liverpool’s attacking outlets I am advocating running the Pep rotation gauntlet on Saturday. Aguero should be a certain starter as Gabriel Jesus has been away with Brazil but there is a concern over just how many minutes the Argentine striker will get.

Having played no more than 65 minutes in each of his last four matches and a Champions League game on the horizon there’s every chance he’ll be withdrawn early again, I’m just trusting he’ll have found the net at least once before that happens. I’d also advocate Raheem Sterling who has an impressive points to minute ratio. He is expensive but if Salah’s injury is worrying you, Sterling could be the ideal replacement.

Liverpool’s trip to Huddersfield looks an appetising fixture on paper as Jurgen Klopp locks horns with his old pal David Wagner. The International break has been a disaster for Liverpool with Salah, Mane, Keita and Van Dijk suffering injuries at various times, though Van Dijk has already been passed fit. To add to that, James Milner is struggling to recover from an injury he sustained against Manchester City, so we may see Klopp have little choice but to rotate his pack this weekend.

As of this writing nobody has been ruled in or out but with a Champions League game to follow in midweek it seems unlikely anybody will be risked here, so I’ve opted for Roberto Firmino who, touch wood, seems to be injury free. Liverpool’s goals have been spread around this season to the point where Firmino only has 2 goals and 2 assists to his name in the league so far this season but Liverpool will be heavy favourites to win here even if their lineup is depleted.

Bournemouth continue to surpass expectations. They’ve traditionally been strong at home but in their previous match they ran out 4-0 winners at Watford. During that game, the pair of Callum Wilson and Josh King ran riot against the Hornets and for that reason I am pushing the virtues of the Norwegian for this weekend. King has penalty duties which gives him the edge over Callum Wilson (also £6.4m) and their opponents Southampton don’t look best suited to deal with Bournemouth’s pacey attack. Bournemouth also go to Fulham next weekend who have the leakiest defence in the league as it stands, so it could be a good time to invest in a King.

I feel like I tip Lacazette every week but he’s in tremendous form at the moment so I’ll keep doing it. Arsenal have really hit their stride under Unai Emery and in the 5-1 dismantling of Fulham they played some truly serene football. In that match, Lacazette netted twice and picked up two bonus points for his trouble, so he and his Gunners team mates will fancy their chances of racking up more goals this weekend against Leicester. Claude Puel’s team are a little bit inconsistent and you wouldn’t describe them as being particularly tight defensively, so I don’t see any reason why Lacazette can’t enjoy another fruitful weekend.

In what is fast becoming the “cheeky punt” slot, I’m opting for Newcastle midfielder Kenedy. This may seem a little knee jerk as he’s not had the best start to the season other than his goal against Man Utd last time out, but I’m looking at this from a bargain point of view. At just £4.9m, Newcastle finally have a clearer fixture list having ran somewhat of a gauntlet in the opening 8 weeks of the season. It’s Brighton at home this weekend followed by a trip to Southampton next week and frankly it’s now or never for Newcastle. If it’s going to be now, I’m backing Kenedy to be a big part of it…or at the very least be a cheap option in your midfield.

The Offside Rule Pod league saw the lead change hands again with Bola Itu Bundar reclaiming top spot thanks to a score of 65. Captaining Eden Hazard accounted for 28 of those points with Richarlison netting 7 and three clean sheets making up the majority of the rest. I’ve finally worked my way into the top 10 after a reasonable few weeks though now all my players are injured! 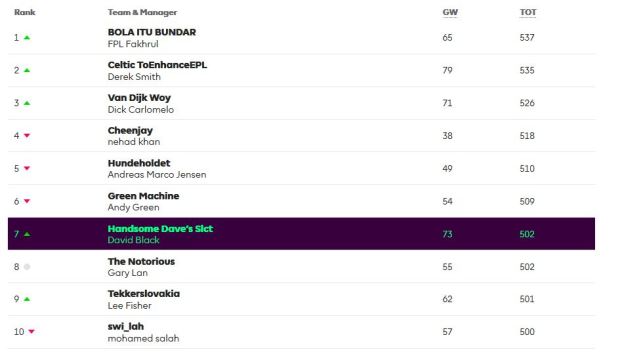 I’ll be back next week with another preview, good luck with your picks!