I’ve been living in a football echo chamber says Florence Lloyd Hughes; a vacuum in which I only saw love for the game, a utopia, and I thought everyone was welcome to join.

But this game is being poisoned. There is a vocal minority that have taken the very essence of a historically working-class game built from solidarity of the workforce and mutated it into a world where abuse and hostility are welcome.

These problems are not unique to football, but that does not mean we cannot make it clear that football is a space where the behaviour from pockets of the terraces and the corners of Twitter is not tolerated.

It is easy to remain in denial about these issues and believe in the power and purity of the game. There are a host of incredible projects around the UK that are using football as a catalyst for change and development. I was blinded by this positivity, until now.

Last week, when posing a question about how we can improve diversity at football grounds and querying the fact that the majority of stadiums are full of white men I was bombarded with replies on Twitter. Yet, it is a fact. Across the 2008-09 season, albeit now 10 years ago, just 8% of fans that attended games were from an ethnic-minority background, 19% were women.

The responses ranged from blanket denials about football’s diversity problem to abuse, racism and even threats. I had not specifically raised the issue of racism, yet fans were defending themselves, fearful that their views would see them accused of being racist – this was a few days before Raheem Sterling was allegedly a victim of racist abuse at Stamford Bridge. 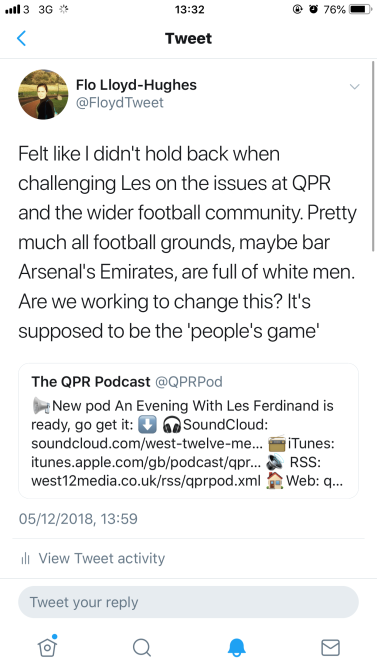 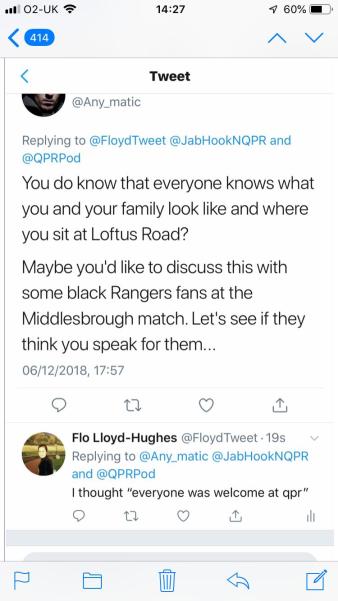 As well as the public replies, direct messages from men and women who said they had experienced racism at grounds and generally felt unwelcome and uncomfortable hit my inbox. Regardless of ethnicity, people were getting in touch to say they didn’t take their families to games because the atmosphere, while sometimes great, had become too much.

At the core of this game is the idea that it’s for everyone, all you need is a ball, it is accessible. The FA’s motto is ‘For All’, the Premier League’s Rainbow Laces slogan is “everyone’s game” and football is constantly referred to as “the people’s game”. However, at the moment it feels like it is far from really representing the people.

Abusive behaviour is expected and accepted at grounds, but the real concern is the endless examples of anti-Semitic, racist, homophobic and sexist chanting that goes unchallenged.

Although Brighton & Hove Albion have not visited my club recently, in all their previous trips to west London I heard some form of homophobic chanting and it always passed by without anyone flinching. When asking friends about the chants they hear at their respective football clubs they all have plenty of references, such as a section of West Ham fans that hiss when they play Tottenham Hotspur, sickeningly mocking the holocaust.

The common thread across all these examples, and my own experience, is that rarely does anyone have the courage to do something about it. We feel the pressure to conform or ignore it because we are scared of what will come of confronting it.

Football is a sport which has struggled to remain true to its roots. The creation of the Premier League helped squash any idea of professional football being a working-class past time.

Community used to be at the heart of football clubs. Yet today, the very idea of a family stand is rejected by some fans.

There will always be fans that disagree with the idea of diversity or of “sanitising football” but we shouldn’t give those fans the power and the platform that they currently have.

Football and politics are so entwinned that we find ourselves battling the same problems in both worlds, but that doesn’t mean we can’t make it clear that the game is a space where that behaviour isn’t tolerated. We can create new communities and grow the positive and diverse ones that already exist within many clubs.

I’m not claiming to have never criticised a linesperson or shouted at an opposition player from the stands, but I’ve had a wake-up call. Why should football grounds be a space where behaviour that is unacceptable in other walks of life is welcomed.

This week, Richard Scudamore, the outgoing executive chairman of the Premier League, commented on the Sterling incident saying English football had “inadvertently fostered safe places for excessive aggression to be displayed”.

As football has changed and modernised (not always for the better) certain fans and parts of society have been left behind. The values that once were at the heart of the game are being hijacked by some as excuses to resist change.

Last year, Greg Clarke, chairman of the FA said that “football shouldn’t just be trying to keep up with the pace of societal change; it should be helping to lead it”. Well Greg, now’s your chance.