After what feels like an eternity, the Premier League is back this weekend. Whilst the FA Cup took centre stage last weekend, the spotlight is shared with the Carabao Cup Final. What does that mean for your FPL team?

There are only 8 fixtures to ponder over this week with big hitters Manchester City and Chelsea amongst those not in action. To further complicate matters, Liverpool and Manchester United go head to head. With nearly half of your lineup potentially in one fixture, differentials could be more important than ever.

We’ve identified five players who you should consider for this weekend. It’s worth noting that the fixture list is going to get very complicated as double game weeks and blanks start to appear from week 32. Depending on your strategy, take note of who is playing twice so you can begin to fill your team for those weeks without having to use a chip.

You may well raise an eyebrow that Lacazette is selected ahead of Aubameyang, but there are reasons. Even though the Gabonese striker has outscored Lacazette 150 to 122 points so far this season, I’m standing by my choice. Firstly, Arsenal are at home to Southampton and they will be heavy favourites to win. Lacazette is suspended for the Europa League tie with BATE (Thursday) which should mean he is rested up for this one, whereas Aubameyang is unlikely to get the same luxury.

It’s not just about minutes though. Any initial worries over his selection seem to have been quelled by 6 consecutive league starts. As well as scoring at Huddersfield in the previous round of fixtures, he has scored in each of his last three home games. To top it all off, he’s £1.6m cheaper than Aubameyang. With form, price and hopefully minutes on his side, will that be enough to tempt you into Lacazette over Auba this weekend?

We’re backing a return to points scoring form for Felipe Anderson. Although his performances have still been of the highest level he has only one assist and no goals to his name in the last 7 game weeks. There is a good chance for that to change as West Ham welcome Fulham.

We all know of Fulham’s defensive issues and you wouldn’t bet on an away clean sheet here. With Richarlison not having a game this weekend it might be en easy switch to the similarly priced Anderson. Looking longer term, West Ham have Man City away next week but after that it’s Newcastle, Cardiff & Huddersfield – that looks like a good set of fixtures to find some form.

It is perhaps not the smartest pick to put forward the striker of the league’s second lowest scorers. However, if anybody is going to score for Newcastle it will probably be Rondon as the Magpies welcome bottom club Huddersfield to St James’ Park.

We discussed the potential impact of Miguel Almiron on the Newcastle attack in a previous article and Rafa Benitez will be hoping the impact of his new signing will generate more goals. Rondon is the focal point of the Newcastle attack and scored the winner against Huddersfield back in December. With Almiron unlikely to be ready for 90 minutes yet we’ve opted for Rondon. His price at £5.7m is very cheap for a starting striker and upcoming fixtures with Burnley, West Ham, Everton and Bournemouth suggest there may be more points in the offing.

Son’s price has been flying up over the past few weeks and he now sits at a season high £9m. This of course coincides with his return from the Asia Cup and he has scored in all three games since his return. This has all been during Harry Kane’s absence, where Son has played as a striker.

Harry Kane has been pictured training this week but Son and Kane played as a pretty effective pair in the run up to Son’s departure so I don’t think there’s anything to worry about. If anything Kane’s return might make Son even more dangerous. Spurs are off to Burnley this weekend but then go on a tough run, facing Chelsea and Arsenal. The South Korean is really showing his class at the moment though and could be considered fixture proof. Nobody will want to face him in his current form, that’s for certain.

You just can’t keep Pogba out of the headlines at the moment. His form since Solskjaer took over as manager has been incredible and he seems to have a positive impact on every game he plays…ignoring the PSG game!

Pogba has 8 goals and 6 assists since Jose Mourinho departed in December. Even if he is up against the league’s leanest defence in Liverpool, it’s a big game and as we saw in Manchester derby last season, Pogba thrives on such occasions.

In the OffsideRulePod league, I have to thank Paul Pogba and Sergio Aguero for their big contributions. My score of 90 was enough to overhaul long term leader Derek, who was also overtaken by The Notorious. Sadly there is still a long way to go! 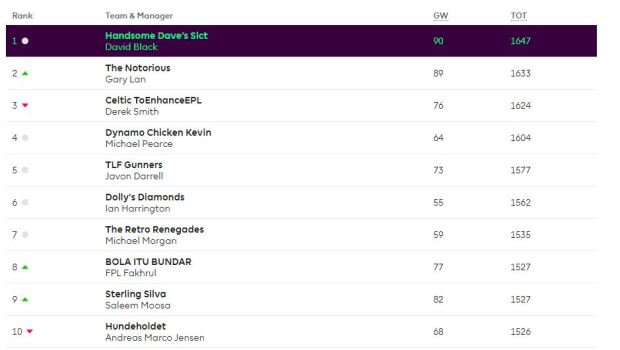 That’s all for this week but I’ll be back next week with more. It’s a Friday night deadline for this week and don’t forget there’s a midweek round of games too, starting Tuesday. Good luck!