Chelsea fan Tim McGeever discusses how life as a football fan has affected his bipolar, how he has learnt to cope and what support is available for others like him, Chelsea Harper writes. 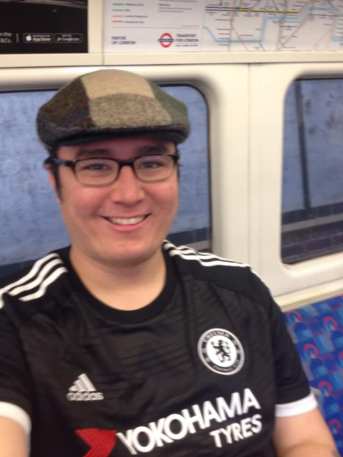 Feeling like it’s the end of the world due to a disheartening defeat or becoming overcome with joy after an encouraging win is something any football fan can relate to. So when Tim McGeever, a lifelong Chelsea fan who was diagnosed with bipolar at the age of 20 explains how his team’s performance can dramatically affect his disorder – it gives a completely new meaning to the term passionate fan.

McGeever, 32, has been going to Chelsea matches since he was just four years old, thanks to his dad who brought him up supporting the club and taking him to games at the bridge.

“I’ve been going to games for 28 years because my dad supported Chelsea” McGeever admits,

Since he was a teenager, McGeever has been a proud season ticket holder, taking his seat in the West Stand as well as following his club across the country, despite his disability.

The highs and lows

According to Mind, around two in every 100 people suffer with bipolar in the UK. As well as causing severe changes in mood, the disorder can also cause a change in energy and behaviour.

For McGeever, the most difficult time of the year is winter where he can become severely depressed and has also admitted to experiencing hypomania – periods of excessively active behaviour.

As he suffers with bipolar, McGeever is classed as an ‘ambulant disabled fan’ – meaning that although he doesn’t need a wheelchair, his condition can still severely affect his football experience.

For many of us, including McGeever, football is everything. But his dedication to the beautiful game can often mean that his bipolar symptoms can intensify for better or for worse. If Chelsea lose for example, which hasn’t exactly been a rare commodity these past couple of weeks, he can become severely low and it can take up to several days or even weeks to get over the defeat – something many of us can simply take on the chin after a night of reflection.

But it isn’t just the bad times which can provoke McGeever’s most passionate emotions – seeing his beloved team win can also result in an extremely positive mood change.

“Munich final was one of the best days of my life when we won the Champions League” he recalls, “[football has] really helped out, it’s made me happier on some occasions.”

Yet, McGeever often compares his success to those of the Chelsea players. This means that even if Chelsea come out triumph, the backlash of success can also trigger his depression, proving that bipolar is more complicated than a simple alternation between emotions.

A typical match day for McGeever

There are also precautions that McGeever takes both prior and during his time at the bridge. To avoid the busy crowds, McGeever will often arrive a few hours before the game where he’ll usually grab a drink at the Copthorne hotel before taking his place in the stands two hours prior to kick-off. Arriving early means McGeever can get a gist of the atmosphere, whilst avoiding the busy commute which can enhance his bipolar and leave him in a stressful state before the game has even begun.

Getting home can also prove quite challenging. “I’ve gone to the restaurants in Fulham Broadway and avoided the main crowd to get something for dinner with my brother” McGeever admits, “or sometimes alone.”

It seems like a lot of effort to watch your favourite club – but you could say that McGeever isn’t exactly your everyday fan. During his time as a Chelsea supporter, McGeever has travelled across the globe to see Chelsea play – attending friendlies in Indonesia and Thailand – as well as watching the blues partake in the Fifa Club World Cup in Japan in 2012.

What support is available?

Yet, despite McGeever’s personal struggle with his disorder and its effect it can impose on his enjoyment of football, there is no provided support for fans who suffer with bipolar at Chelsea.

For visually impaired supporters they provide audio commentary and for autistic supporters there is now a sensory room in the East Stand, but the support for bipolar sufferers remains unclear and insufficient.

But what support can Chelsea provide for bipolar fans? Well, McGeever believes the chance to meet with other supporters who suffer with the same disorder would be a step closer to making his football experience more enjoyable.

Having not met any other fans with bipolar before, he claims: “I think it would be very helpful… because you know you’re in the same boat as a lot of other people.”

For fans that suffer with bipolar, the emotions they feel for the sport become more enhanced and are often more difficult to control. That’s why, when asked if he considers himself to be like any other football fan, McGeever admits:

“I think I’m more extreme than most. Some guys say they would die for the club. I would probably categorise myself as that extreme.”

The football fan experience is unique to each person. Some people travel across the UK every week to get a glimpse of their favourite team, others will go above and beyond to follow in the footsteps of their football idols and in McGeever’s case, some people will experience their greatest highs and deepest lows as a result of supporting their favourite club.

But that hasn’t prevented him from turning up at the West Stand each week, cheering on the blues.