England goalkeeper Mary Earps is understandably buzzing about being a part of the Lionesses squad for the 2019 World Cup.

The Wolfsburg stopper is part of the squad that will be jetting out to France for the tournament, a competition she describes as the biggest opportunity women’s football has ever seen.

She is a player that has come on leaps and bounds in the last year since her move from Reading to Germany, and describes it as the best thing she’s done.

The 26-year-old believes she has grown as a person along with the experience of playing abroad, but the immediate task at hand is the World Cup and England haven’t made a secret of their ambitions – they are here to win it.

Alasdair Hooper spoke with the England goalkeeper ahead of the 2019 World Cup tournament to get an insight into her world. 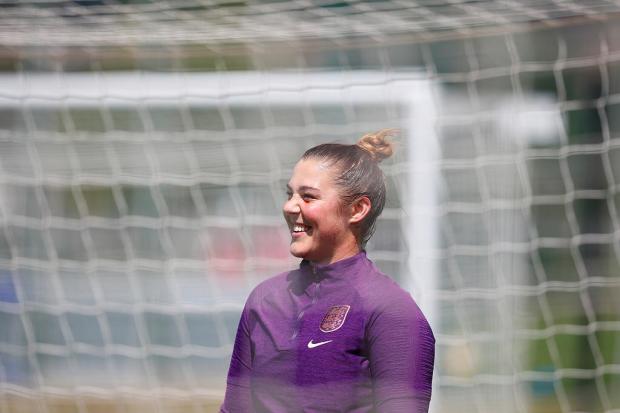 “The excitement is the hardest thing; I’ve not really felt nerves yet,” said Earps.

“I’m sure there’s some members of the group that do get nerves earlier.

“I’m one of those where it comes in either on the game day or it is creeping in towards the match.

“The most important thing that we’ve got to focus on is going from game to game and that attitude of really taking everything as it comes.

“Obviously we have been very clear in our ambitions – we want to win the tournament – but you can’t do that unless you win your first group game.

“So it’s really easy to get lost in ‘oh look at that beautiful shiny trophy, look at that shiny thing’ and lose sight of the thing in front of you.”

The impact of Phil Neville

England manager, and recent Offside Rule guest Phil Neville, has been in his current role for around a year and a half.

This will be his first major competition at the helm but victory in the SheBelieves Cup in March 2019 certainly set the ball rolling in a positive direction.

For Earps, the environment the former Manchester United player has brought to the camp has been key.

“His style of play is a bit different, he likes to play tight possession-style football,” she said.

“In terms of the environment in the camp it’s friendly and he likes to stay in communication with people.

“He likes to have a little bit of banter and take the mick out of people quite a lot, which suits a lot of us.

“A lot of us are joking around and not taking life too seriously.

“Because he’s been in men’s football as well and from what I’ve heard – having friends, coaches and previous coaches in men’s football – they tell you that the banter is another level, borderline are the stories I hear.

“Not even borderline, over the line.

“I think he’s used to that dynamic but he also expects really high standards.

“So it’s getting that balance between the fact that we’re here to have a good time but we’re also here to work hard.

“I think that’s the environment he’s tried to create.”

As well as the environment in camp, Neville and his staff have been working on developing the Lionesses play on the ball at the same time.

Goalkeepers are often treated as outfield players during training sessions and that is something that plays to Earp’s strengths.

“There’s so many things you’re constantly working on it’s hard to pinpoint just a few,” she explained.

“People always ask me ‘what do you want to get better at’ and I could reel off a list of about a thousand things.

“I think you’re constantly looking for that little bit of improvement.

“Where Phil comes in is he likes to communicate with you.

“So when I was away in Germany he wanted to stay in communication and I think that was really important.

“When you’re not playing in the WSL your games aren’t on TV so I have to get the footage to him and share things with him and obviously I have that relationship with Mark Mason the goalkeeper coach as well.”

She added: “The thing that sticks out in my mind that Phil has brought in, and everyone has got better at, is rondos.

“He loves a rondo and you’ll often hear him shouting it on the side-line.

“The goalkeepers are involved in that so as a result we’ve all probably got that little bit better on the ball.”

“The versatility in the group is huge”

Much has been made of the strength in depth of this particular Lionesses squad.

What is also plainly evident is the level of togetherness the group have, something Earps highlights as one of the key factors within the squad.

But the 26-year-old goalkeeper also believes that the sheer versatility in styles and players could give the Lionesses an edge.

“I think the versatility of the group is huge, we’ve got so many different types of player,” the former Reading player said.

“We’ve got so many different types of people and characters, so I feel like we’ve got a little bit of everything.

“We’ve got the strong, rugged type of player and we’ve got the tight and technical players who want to pass it around and pop it.

“Obviously we’ve got great goalkeepers who can produce magic saves and I think that’s really important.

“At this level hard work and skill is non-negotiable, there’s obviously a certain level of skill you need to have to be an international – but I think we’ve got strength and depth and versatility.”

Trying not to get lost in the social media bubble

If anything showed us the true power of social media it was the way it was used during the 2018 World Cup in Russia with the England men’s team.

Whether it was cries of ‘It’s Coming Home’, or numerous memes of Harry Maguire nonchalantly leaning in conversation, it helped connect the fans with the players.

But there are other instances where players try to escape that social media bubble – the Great Britain hockey team that won gold at Rio 2016 decided to stay off it for the competition by way of an example.

“Social media is unbelievable – it can be so positive and so negative in so many ways,” said Earps.

“It’s super individual and I don’t think we will be taking a unanimous vote on it.

She added: “I go up and down with it.

“It’s like a timeline of all the things you’ve achieved and gone through.

“But I am a big believer in that it’s not real life. 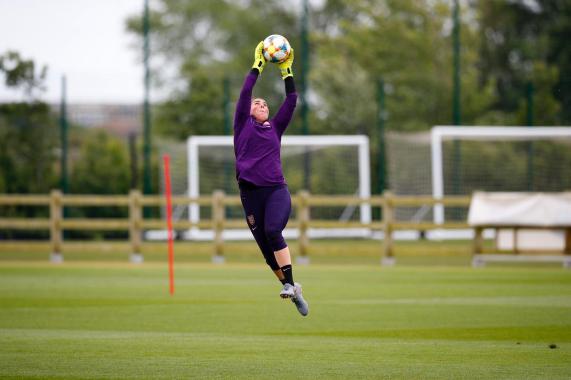 “You don’t see the times where I’m wracking my brain out because I can’t nail this one specific thing in training.

“We did the double this year and won the SheBelieves so you just see the fact that I’ve won three trophies in six months and you think my life is brilliant.

“It’s been an unbelievable six months – I don’t deny that.

“However, there’s hard times along the way and I try and keep it as real as possible in the sense that I don’t want to post every five seconds because people get this idea that your life is perfect.

“That’s not the influence I want to have on people.

“You can sense there’s more interest than ever”

The 2019 Women’s World Cup is being treated more seriously than ever before and it’s showing.

There’s more media interest, more fan interest and this chance is certainly not lost on the players.

“Without question this is the biggest opportunity that women’s football has ever seen” said Earps.

“You can just sense it, it’s hard to put it into words.

“There’s something special going on and I am very, very excited.”