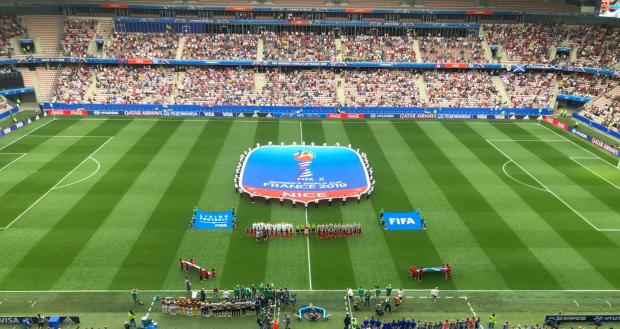 Overwhelmed by the occasion but ready to move on.

Scotland’s first-ever World Cup fixture was always going to be a big occasion. The historical prominence of the game could be seen on the face of the whole squad, who looked edgy and tense throughout the first half.

The pressure definitely had an impact on Nicola Docherty. In a moment of panic, she stuck out her arm to try and block Fran Kirby’s shot and initially got away with it before VAR stepped in and correctly awarded the spot-kick which Nikita Parris confidently put in the top-left corner.

The Scots’ nervous energy never really subsided, and it eventually turned to fatigue as the Nice heat took its toll. However, they continued to work hard and took the best chance that came their way with Claire Emslie making the most of a Steph Houghton mistake late on.

With a bit more time and a few extra Lucozade’s, Kerr’s side could have ground out an equaliser but there was nothing left in the tank.

Now the first game is done, the team can look forward to a calmer performance against Japan and Argentina. There’s still time to get out of this group.

The Tartan Army know how to party

Scotland’s support out sung, out danced and out-funned all the Lionesses’ travelling support. There were kilts aplenty in the 27-degree Nice heat and Saltire cross flags spread across the whole of the Allianz Rivera. The Tartan Army’s singalong to Flower of Scotland was impressive and seriously dwarfed England’s tame and out of sync rendition of  God Save the Queen.

The army were out until the wee hours, pink skin to match their pink shirts but still singing. Without their energy the echoey silence that swept the stadium would have been even more embarrassing for the organisers. An over-hyped attendance, initially estimated to be about 20,000, left gaps around the stadium but pockets of Scottish noise remained. Just like at Euro 2016, when the French fell in love with the Irish fans, the Scots will be taking France by storm, one box of wine at a time.

Two years ago, with a squad that lacked its stars, Scotland were thrashed by England 6-0. Sunday’s result showed that improvements have been made and the gulf between the home nations isn’t what it once was.

It was a joy to watch Kim Little make her long overdue major-tournament debut after she cruelly missed on Euro 2017. She couldn’t leave a lasting impression in Sunday’s game but she will certainly play a part in the next two fixtures.

Scotland’s performance was worthy of a side that sit much closer to England in FIFA’s world rankings. Despite the gap of 17 places, the Scots stayed patient and organised, absorbing the pressure and letting England dominate the possession without offering much of a threat.

The early set back and always controversial VAR review could have rattled Shelley Kerr’s side, but they managed to bounce back, steal goal and create a nervous last 10 minutes for England fans.

Cuthbert can be tamed

What an incredible support and atmosphere created last night from the travelling Scotland fans. Thank you to every of you who made the long journey out to Nice 🏴󠁧󠁢󠁳󠁣󠁴󠁿🏴󠁧󠁢󠁳󠁣󠁴󠁿🏴󠁧󠁢󠁳󠁣󠁴󠁿 We pick ourselves up and go again on Friday. Next Up, Japan in Rennes 🇯🇵 pic.twitter.com/9MvrfHrdwY

Chelsea’s Erin Cuthbert was the talk of the build-up, much had been said about the threat she poses and her creativity. But, Scotland rarely showed signs of expression. England pushed Cuthbert out wide any time she tried to up the tempo or start an attack. She wasn’t able to cut in and deliver like she has in the WSL and in the UEFA Women’s Champions League this season. Cuthbert will get her chance to shine at this World Cup it’s just a shame she couldn’t nutmeg the old enemy.

Kerr knows how to improvise

Kerr’s substitutions took England and Phil Neville by surprise and created a bit of uncertainty on the England bench. The addition of Chloe Arthur and Lizzie Arnot in the last 15 minutes piled the pressure on and created some uncertainty for the game’s leaders. The Lionesses instability was reinforced by the absence of Millie Bright, who had to come off the pitch after falling heavily on her shoulder. Kerr’s switch up showed her ability as a coach and with more time and a bit more depth this Scottish team can go far.