The International break is over and FPL managers are reassembling ahead of the return of club football. Whilst a certain Portugese manager is back in town, most of us are sweating over the return of our International stars. Please, no more injuries! Dave Black take a look at the FPL weekend ahead.

Jose Mourinho’s appointment at Tottenham has dominated the football news this week. From an FPL perspective, that Tottenham defence is only going to tighten up but just how quick can the re-employed one work his magic? There’s worrying news coming out of Liverpool as FPL stalwarts Salah and Robertson struggle to shake off injuries and don’t even get started on what team Pep will pick. It’s good to be back.

We’ve gone for a format change too. Rather than just opting for five picks, I’ve expanded it to the full 11. There is minimal thought given to the budget and this is merely a wishlist of who I would pick if I was starting with a blank slate this week. It’s a tricky fixture list this week so it seems a good week to try it out. As ever, comments are welcome.

Clean sheets have been at a premium in general this season but save points are on the rise. For that reason, Aaron Ramsdale (£4.6m) gets the nod in goal.

Having collected bonus points in each of his last three matches as well as three clean sheets in four, Ramsdale represents value for money but also a fair chance of a points return as Bournemouth welcome Wolves. It’s a bold move considering Wolves have only failed to score once this season but with Jimenez having been away representing Mexico, it could be Bournemouth’s chance to profit.

With Andy Robertson a major doubt, Trent Alexander-Arnold (£7.2m) basically picks himself. Liverpool are off to Crystal Palace but will still attack in numbers and Trent’s dead ball delivery is always a threat. He’s joined by Caglar Soyuncu (£4.9m). Leicester are in fantastic form and the Turkish international is the cheapest route into the Foxes defence.

Everton face out of form Norwich this weekend so Lucas Digne (£5.9m) is the first of two Toffees in my wish list. The Frenchman has as many assists as he does clean sheets (3) but with Norwich struggling at both ends this seems like a good opportunity to add to both statistics.

Watford only won their first game in week 12 but that hasn’t stopped me putting forward Daryl Janmaat (£4.4m). The Dutchman can boast 3 clean sheets in 5 games as well as an assist along the way, making him a useful budget option ahead of a home game with Burnley.

With Man City and Chelsea clashing on Saturday evening, I’m not keen to pick too many players from either side. I’ve opted for Man City’s top points scorer (76) Kevin De Bruyne (£10.2m) despite having only one return in his last five Premier League appearances. There is always an element of uncertainty surrounding Pep’s team selection but the Belgian magician should be a certain starter.

He’s joined in midfield by Richarlison (7.9m) who will be keen to add to his 3 league goals when the Canaries make the trip to Merseyside. Whether played out wide or as a central striker, he always seems Everton’s most likely goal threat.

Next in the lineup is Sadio Mane (£12.1m). With Mo Salah considered a doubt, Liverpool will look to Mane to continue his sparkling form which has seen him pick up 7 goals and 4 assists already this season. Selhurst Park is a tough place to go but Liverpool coverage in attack is a necessity.

Completing the midfield quartet is James Maddison (£7.5m). Fresh from making his England debut, Maddison has been in great form for Leicester and tends to be at the heart of everything they do. News that he has shaken off a calf injury will be music to the ears of those that own him.

It’s impossible to ignore Jamie Vardy (£9.2m) as Leicester make the trip to inconsistent Brighton. With 11 league goals to his name already including 8 in his last 6, Vardy owners will be hoping he has made the most of the International break to trouble a Brighton side without Lewis Dunk or Adam Webster.

Completing the team is Pierre-Emerick Aubameyang (£11m) who has been just about the only good news for Arsenal all season. Their new captain has 8 goals this season and a home game with leaky Southampton should offer him the chance to add to that tally.

Well done to Yasin who leads the way approximately a third of the way through the season. An excellent choice of captain Vardy accounted for 24 of those 70 points but there’s only 21 points between the top 10, so it’s all to play for. 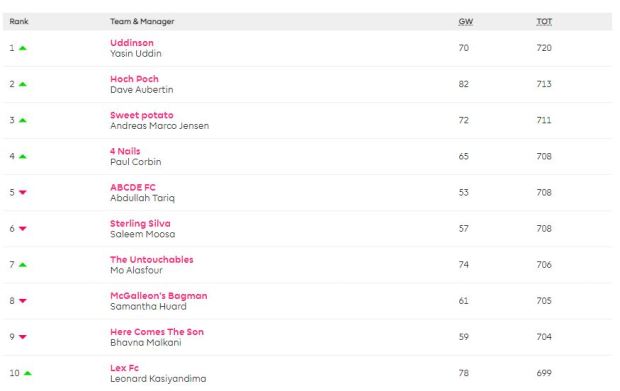 That’s all for this week. Remember to have your teams picked by 11.30am on Saturday and I’ll be back next Friday with more. Good luck!