The Premier League returned after the International break and did not disappoint. As the calendar creeps towards December, the tough winter schedule really starts to take shape as we head into two game weeks in 3 days. FPL managers have some tough decisions to make so Dave Black takes a look at the games ahead.

With a midweek round (GW15) following in such short proximity, it makes sense to look at both sets of fixtures this week. Last week was very good for Jamie Vardy owners whilst Aguero and Sterling owners were tearing their hair out for differing reasons. Mo Salah got a much needed rest whilst Jose Mourinho gave new hope to owners of Spurs’ attacking players, even if the defence has more questions than ever.

We’re sticking with the Wish list theme for this week but taking both sets of games into account. These are 11 players that I’d want in my team with the two fixtures taken into consideration.

I’ve given the gloves to Nick Pope (£4.7m) this week. I’m hoping Burnley’s home game with Crystal Palace will see a clean sheet whilst the midweek home game with Man City should be a chance to pick up some save points if nothing else.

Once again Trent Alexander-Arnold earns his place in the selection. He was a late substitute during Liverpool’s Champions League clash with Napoli so he should be well rested for the upcoming double header. Liverpool have two home games, starting with Brighton this weekend and out of form Everton on Tuesday.

Ben Chilwell (£5.8m) is the Leicester representative in our back line as the Foxes go hunting for a 5th successive clean sheet. Home games with Everton and Watford suggest a 6th and 7th are not out of the question.

I never thought I’d say this, but John Lundstram (£5m) is basically a must pick. The reality here is that Lundstram is listed as a defender on the game but essentially plays in attacking midfield. With 6 points on offer for a defender goal it’s too big of a risk to leave him on your bench – and he is the top scoring defender in the game. Three goals, two assists and five clean sheets. Ignore him at your peril.

As of this writing it’s unclear how fit Tammy Abraham will be for these fixtures, so instead Christian Pulisic (£7.5m) gets the nod. Chelsea enjoy back to back home games with West Ham and Aston Villa. Neither team have been particularly brilliant on their travels and given West Ham’s current form, a Chelsea attacking option could make a good captain this weekend.

With Sergio Aguero ruled out for a few weeks, there’s an added pressure on Raheem Sterling (£12m) to rediscover his goal scoring touch. Man City face Newcastle and then Burnley both away from home but Sterling has scored 5 of his 7 goals away from the Etihad so far this season. There’s a possibility Sterling will get minutes as a centre forward at some point during Aguero’s absence which adds further credit to his selection.

We need Liverpool attacking coverage for their two home games so Sadio Mane (£12.2m) again gets the nod. Salah has recovered enough to play 90 minutes in midweek but if his ankle is an ongoing concern then it makes sense to bank on Mane, who is now valued the same as the Egyptian. Mane is second only to Jamie Vardy in the overall points scored this season.

Rounding off the midfield is Heung-Min Son (£9.7m). Son has had returns in his last four gameweeks and has played on the left side of front three so far under Mourinho, a position that undoubtedly suits him. Tottenham face Bournemouth at White Hart Lane followed by a trip to Old Trafford, which isn’t the fortress it once was.

At a risk of repeating myself, I can’t ignore Jamie Vardy (£9.7m). With 9 goals in 7 matches, as well as 3 assists in that time, Vardy is the in form man right now. Leicester have three home games in their next four so the Vardy party doesn’t look like stopping any time soon.

Danny Ings (£6m) looks like a bargain selection ahead of home games with Watford and Norwich. Ings has been the only bright spot for Southampton at times this season and the Saints will look to him to score the goals to get them out of trouble.

Raul Jimenez (£7.5m) is another in form player who has two home fixtures on the horizon. Sheffield United and West Ham are at opposite ends of the form table but Jimenez will be confident of adding to his three goals in the last three games.

Week 13 proved to be quite a high scoring week and there was minimal change at the top of the Offside Rule Pod league. Yasin made the wise choice of captaining Jamie Vardy for 24 points but with just 8 points between the top four, December could prove to be a pivotal month with so many game weeks. 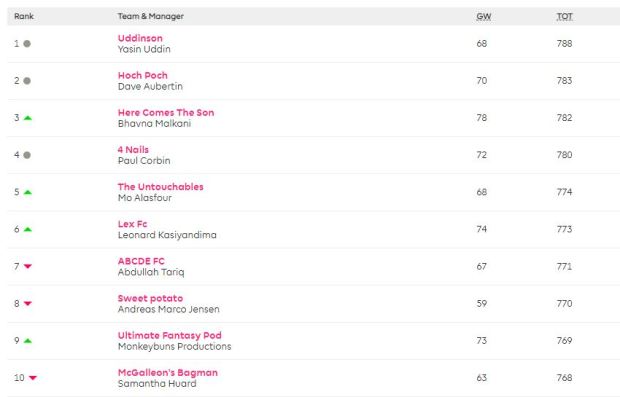 That’s all for this week, I’ll be back next week just hours after game week 15 has finished. The deadline for Saturday is 11.30am so get those teams set and good luck!