Lyon have added the Coupe de France Féminine to their trophy haul this season after beating PSG 4-3 on penalties at the Stade Abbé Deschamps in Auxerre, writes Martin Whiteley.

PSG managed to hold the ever-dominant Lyon to a 0-0 draw in normal time, but in the crucial shootout Lyon goalkeeper Sarah Bouhaddi saved PSG midfielder Lea Khelifi’s spot kick and Lyon claimed their 9th cup win and second trophy of 2019-20.

It was a tough game for both sides. A torrential downpour coincided with kick off, making conditions tricky and then, in the 10th minute, a power outage left players in the dark and getting soaked.

After a short delay, the lights returned to perform the one function everyone needed of them and the match assumed the patten that generally takes place when these two teams meet. Lyon, with the majority of possession and PSG trying to generate enough pressure that could force a mistake from their opponents.

The sheer number of quality players Lyon possess means it is difficult to contain them all, but on this occasion the cause of the problem that cost PSG the game was all self-inflicted. 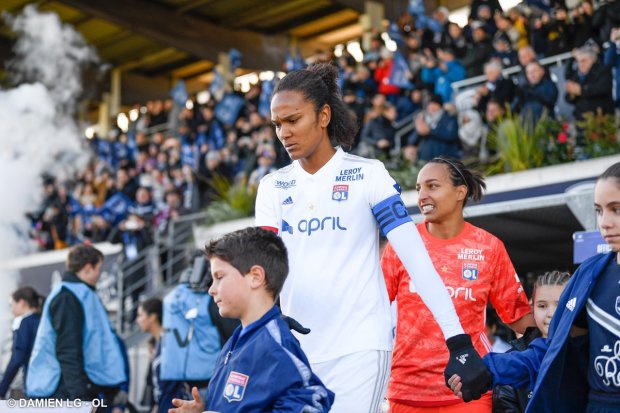 Around the 90-minute mark with the game still goalless substitutes from both sides emerged from the bench — including new arrival Jodie Taylor — in readiness for a penalty shootout.

Both teams scored their first three attempts from the spot, before PSG goalkeeper Christiane Endler brilliantly turned away the penalty from Eugénie Le Sommer to give her side the advantage.

With the adrenaline still most likely coursing through her veins it was Endler herself who stepped up next to take a penalty and rifled her attempt off the bar and over.

Leading sides usually take advantage of the smallest of opportunities and Lyon did just that. Firstly, Ballon d’Or runner up Lucy Bronze slotted home her spot-kick before goalkeeper Bouhaddi saved the fifth PSG penalty from Khelifi to secure a 4-3 success for Lyon and yet another trophy.

This cup success for Lyon was their record-extending ninth in total, including the one they claimed when the competition was previously played under the name of the Challenge de France up to the 2010-11 season. It was also their eighth triumph in the last nine seasons.

Back in May, Lyon were awarded their 14th straight league title after being three points clear of PSG at the top of the Division 1 Feminine table when the season was halted due to Coronavirus in March.

They could yet add another trophy to their cabinet this year, as they head to Spain to compete in the last eight of the UEFA Women’s Champions League. Lyon will face Bayern Munich in a one-leg quarter-final tie on Saturday 22nd August.

The French dynasty has six Champions League titles to its name already and it’s hard to think there’s many teams that could stop a seventh.