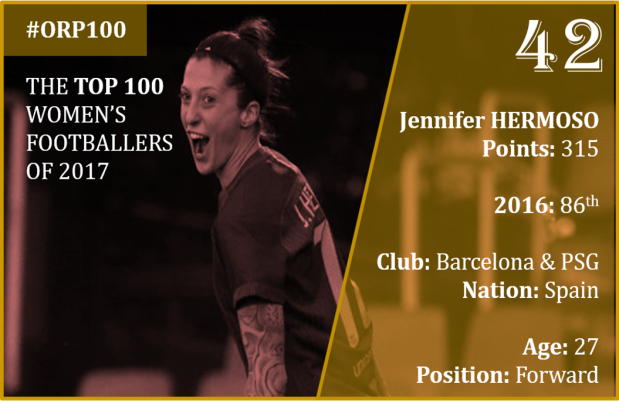 There can be few out and out strikers in world football who have endured a period of form like Jennifer Hermoso has. After ending the 2016-17 La Liga season with an incredible 35 goals for Barcelona, Hermoso was snapped up by French giants PSG.

In France, Hermoso has become the provider rather than the scorer, leading the assists ranks in Ligue 1, setting up eight goals already as the first half of the season comes to a close.

Things were more frustrating on the international stage, Hermoso did find the net as Spain won the Algarve Cup earlier this year, but failed to find the net at Euro 2017 as Spain bowed out on penalties to Austria.

“Jenni is our play-maker. She is a girl as comfortable with her left foot as she is with the right. She has a great talent and represents a real contribution offensively for our team.”

“Jenni is a player with an exquisite technique that allows her to control the ball easily. When she picks up the ball the game seems to stop to give her time to choose the best option. She likes to give the last pass and she does it all with a unique elegance. Her passing is fantastic and she always puts it where she wants, both at set pieces and in play.

“Jenni is special, one of her smiles changes the mood and having her in a team is always a plus. Besides one of the funniest people I’ve ever met!”

“She is the most talented Spanish player I have ever played with, she is capable of doing things that only she knows and is great company in the locker room! She was also the top scorer in the league last year with 35 goals!”