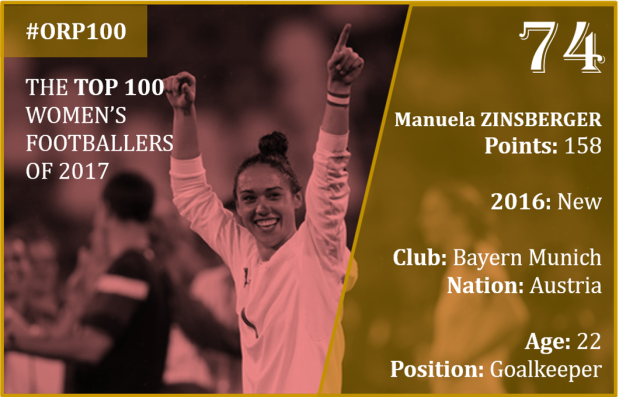 Whilst still relatively young and untested by any goalkeeper’s standards, 22-year-old Manuela Zinsberger showed Europe just show good she is and how good she can become at Euro 2017.

During a tournament where Austria found themselves under plenty of pressure during their run to the semi-final, Zinsberger was regularly one of the key reasons for their progression, pulling off several impressive saves.

Beaten to goalkeeper of the tournament by Sari van Veenendaal, Zinsberger also began to make moves at Bayern Munich, firmly dislodging Tinja-Riikka Korpela as Bayern’s No.1.

“A great personality, whose voice is heard within the locker room. She was one of the most consistent players at the Euro’s, showing not only ‘traditional goalkeeping skills’, but her development within various areas of modern goalkeeping such as passing, anticipation, being able to intercept the opponents deep ball and controlling the box.

“Manu is a young, very talented goalkeeper. Besides the specific goalkeeper qualities, she has a particularly brave style of play. She also plays outside the box as the first of the outfield players, as well as “Libero” behind the defensive line.”

“Manu is an uprising super talent. She is young and already has great skills that will just get better as she ages and gains even more experience. She was one of the few goalkeepers at the Euros who exuded confidence, consistency, and a strong performance. She is also a great personality on the field communicating with her teammates around her and encouraging those on the field.”