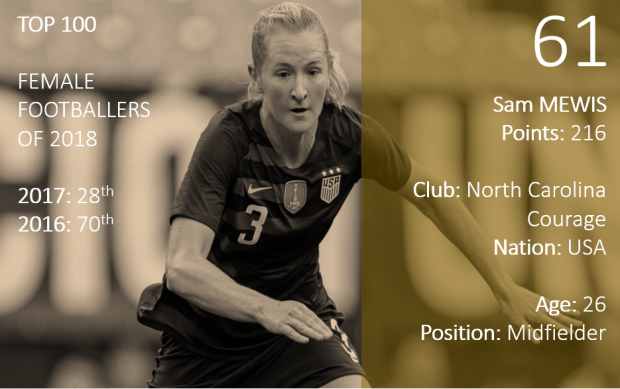 Injury meant Mewis missed some of USA’s early games in 2018 but, upon returning, she played a big role in North Carolina Courage’s NWSL triumph. She scored in consecutive away games at Portland, Orlando and Sky Blue before contributing a decisive goal against Chicago in the play-off semi-finals. Her first national team appearance of the year did not materialise until June but she has been a regular squad member ever since and was on target in a World Cup qualifier against Panama.

“The best box to box midfielder in the world. Speed, size, power and elite athleticism.
Great range of passing and an IQ second to none. Can score goals, can defend and a fabulous mentality to grow. Totally team oriented and a genuine locker room personality.”