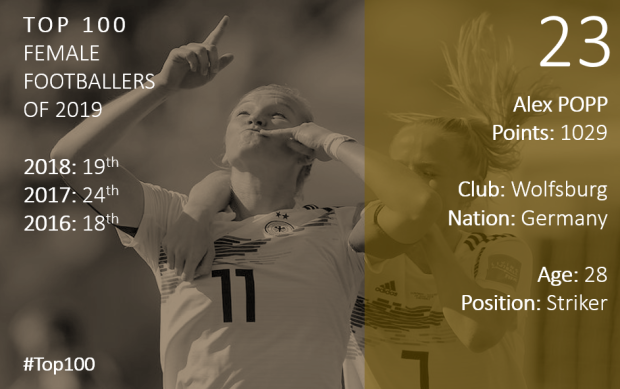 It was another virtuoso year for one of Wolfsburg and Germany’s key players. Able to play as a lead striker or sit deeper in midfield, Popp found the net 22 times in 2019, 13 times for her club and nine times for her country, including two goals at the summer’s World Cup. Playing up front, Popp scored the opener and generally bullied England’s defence in a recent friendly at Wembley and she played a key role as ever in Wolfsburg’s domestic success. There’s not a lot left to say about Popp’s importance given her consistency in performance shows year after year and this is the fourth year in succession she’s ranked between 18th and 24th.

“She is athletically very gifted and has a real hunger to win. She will put her body on the line for the team win and she’s probably one of the best headers of the ball I’ve seen in the women’s game, if not the best. She has incredible timing.”