In the second of ten pieces to come over the next 10 week days, we look over three FA WSL stars, some of the world’s most clinical strikers and some solid centre backs.

You likely won’t have heard of Tabitha Chawinga but you should have come the end of 2016. The Malawi international was outscored only be Pernille Harder and Stina Blackstenius in the Damallsvenskan this season, scoring two more than Marta and three more than Lieke Martens for a side that finished just two places above the drop zone. Sadly for Chawinga, she couldn’t perform on the international stage after Malawi missed out on both the Olympics and the Africa Cup of Nations. 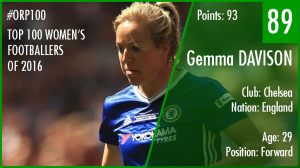 Bouncing back from the disappointment of missing out on the 2015 World Cup squad, Davison once again played a key part in Chelsea’s season and began to hold down a regular spot in Mark Sampson’s squad. Against Estonia, Davison gave her marker a torrid time and has had to adapt in Sampson’s 3-5-2 system but her pace and trickery has continued to terrify defences in the FA WSL. At 29, Davison is at her peak and will be desperate to reach Euro 2017 for a chance to show her skills off on the world stage.

After proving to be a big player for Australia as Alen Stajcic’s side proved a sturdy competitor at the 2015 World Cup. Heyman continued her good form with five goals for Canberra in last year’s W-League and already has two during this year’s campaign. Heyman scored three goals for her country in the Olympic qualifiers and got two at the games herself in a resounding win against Zimbabwe. Could Heyman have another crack at NWSL or elsewhere in Asia when the W-League finishes?

The exciting attacker put her name up in lights at the end of 2015 when she scored both goals in a win against England and scored the single goal that ended USA’s unbeaten run of 104 home games without defeat. A much anticipated move to the FA WSL never materialised but Shuang did continue to shine in her home country with Dalian Quanjian and also went to the Olympic games in the summer. Whatever her next move is, we’ll hear a lot more of Shuang in the future – hopefully in England.

Along with Veronica Boquete and Sonia Bermudez, Jennifer Hemoso has been one of Spain’s most lethal attackers in the last year or so. Hermoso scored 24 goals in last season’s La Liga campaign and is already half way to that total this season as Barcelona chase glory on the European scene too. Hermoso’s another one we’ll see much more of when she comes up against England at the Euro’s next summer and both they and Scotland will be hoping she’s not on top form when they come head-to-head.

The Dutch No.1 really came to the fore this season as one of the FA WSL’s top stopper. Her first full season in the league started with potentially the save of the season away at Manchester City in the league before going on to keep a clean sheet in the FA Cup final against Chelsea. Van Veenendaal’s season has been ultra solid for Netherlands too and she’ll be looking forward to representing her country in home soil next summer. With Emma Byrne coming towards the end of her career, Van Veenendaal’s Arsenal place looks nice and cosy.

At 24, Leonie Maier hasn’t even reached her peak and is already playing a key role for both the Bundesliga champions and the Germany national team. 2016 started nicely, Maier scored the winning goal against France in the SheBelieves Cup, won the league with Bayern before going to the Olympics with her country. Playing a vital role, Maier started in defence throughout the tournament and walked away with a gold medal to show for it. With time on her side, Maier’s ceiling is sky high and she can expect much more success with both club and country.

It’s been a long road to the top of NWSL for Jessica McDonald and it may not ever get better than 2016 for the 28-year-old. McDonald hit double figures for Western New York Flash, sitting just one goal behind team mate Lynn Williams and Houston’s Kealia Ohai. On McDonald went to the NWSL play-offs, with the Flash fairly unfancied, the striker missed her penalty in the final but her side eventually prevailed to give McDonald and her team mates the NWSL Championship. A USWNT cap on the horizon?

After another good year with Montpellier in France, Sembrant has continued to enhance her reputation as a dependable centre back but her real achievements this year came with Sweden. Sembrant was almost the fall guy when she missed a penalty against USA at the Olympics but she bounced back to walk away from Rio with a silver medal after Sweden were beaten by Germany in the final. At 29, Sembrant is at her peak for a defender and may still have a lot to offer one of Europe’s top clubs.

Given Manchester City conceded just four goals all season with three of them being penalties, many would argue Bardsley had little to do this season but that’s simply not accurate. The art of any great goalkeeper is coming up with the goods when you’ve had little to do and Bardsley did that on several occasions this season. She made three big saves in City’s recent Champions League match against Brondby and kept clean sheets in big games against Chelsea, Arsenal and the Continental Cup final against Birmingham.