In the third of ten pieces to come over the next 10 week days, we take a look at four of Lyon’s conquering stars, a couple of Swedes and a veteran Aussie… 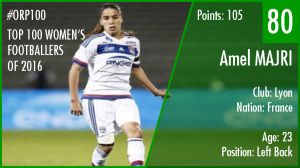 Despite originally earning her keep as an attacking winger, Majri has regularly found herself in new surroundings for Lyon – as left back alongside regular defenders Renard, Kumagai and Mbock Bathy. Her attacking instincts have helped Lyon going forward and she played the left back role well in Lyon’s Champions League final victory over Wolfsburg. Majri has also been used in that position for France and at just 23, the defender has plenty of time to one day return to her natural position or continue to flourish in defence. 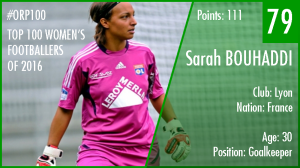 Sarah Bouhaddi’s exuberance and occasional big error hasn’t always made her the most popular among French fans but Lyon fans couldn’t help but adore her as she became the hero in the 2016 Champions League final. With Lyon trailing in the penalty shootout, Bouhaddi saved Wolfsburg’s final two penalties to turn the shootout on its head and ensure Lyon completed the season with the treble. Bouhaddi was also France’s No.1 in Rio and ends the year with memories to last a life time. 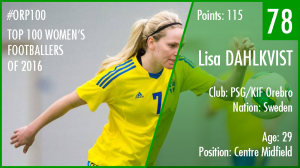 Dahlkvist was one of several Swedish players to make the move to PSG but like her team mates—Caroline Seger and Kosovare Asllani—she left in 2016 and returned to Sweden with her old club KIF Orebro. But for Dahlkvist it was all about Sweden, the 29-year-old part of the side that surprised many by knocking out world champions USA as they picked up a silver medal. Dahlkvist has also just renewed her contract as Orebro look towards a much improved 2017 where they can return to challenging the top sides. 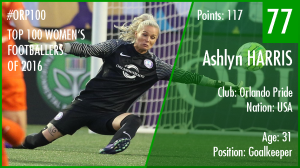 Whilst Ashlyn Harris continued to play back up to Hope Solo during the first part of 2016, she certainly proved her credentials to replace Solo post-suspension with Orlando Pride. It was always going to be a busy year in goal for a newly formed team but Harris still managed to keep four clean sheets and won a staggering eight save of the week awards in the NWSL. Well rehearsed then to keep Solo’s place should the 35-year-old not return to the national team but she has big competition from some NWSL team mates. 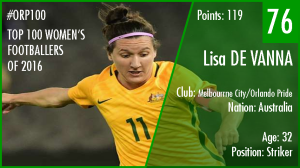 Lisa De Vanna’s club career during 2016 never really took off, she swapped Melbourne Victory for Melbourne City over the winter in order to win the W-League title before turning her attentions to the international scene. De Vanna scored vs Zimbabwe at the Olympics and became the face of a vine that went viral when she attempted to drink a water bottle the wrong around! De Vanna eventually joined Orlando Pride with an eye to the 2017 NWSL campaign and should still have plenty to offer – especially if Alex Morgan leaves.

With Stina Blackstenius and Pernille Harder scoring 44 goals between them as Linkopings won the Damallsvenksan 2016, you wouldn’t blame many for not recognising Claudia Neto’s talent during 2016. But the midfielder played a huge part in the league success as her club toppled FC Rosengard in 2016 and on top of that, Neto captained Portugal to qualification for Euro 2017 where the 28-year-old will have the ultimate chance to show what she can do on a global platform. She’ll certainly be a tough opponent for anyone.

It’s a surprise at this point that Sofia Jakobsson is still playing in France but not for one of the countries top two teams. The Montpellier forward already has six goals during the current Ligue 1 season, lagging only behind Eugenie Le Sommer and Ada Hegerberg. Jakobsson’s year was made all the better as she played a key role in Sweden’s run to the 2016 Olympic final, picking up a silver medal after Sweden were beaten by Germany in the final. Jakobsson is another who could play a big part at next summer’s Euro’s.

Andressa was one of many players on this year’s list who earned themselves a big summer move. After shining during her sole season in France, Barcelona signed up Andressa ahead of the new La Liga season and currently lead the way from rivals Atletico Madrid. The 24-year-old also got to play in her home Olympic games, scoring for Brazil against China but ultimately missing out on a medal in the bronze medal match. The classy forward has already settled nicely into life at Barcelona with her performances in La Liga.

Given she’s tasked with attacking team mates including Dzsenifer Marozsan, Eugenie Le Sommer and Ada Hegerberg, it’s no surprise to see Elodie Thomis slightly overshadowed by her team mates in our list but she’s had an impact for the treble winners. Thomis registered nine assists as Lyon won the 2015-16 Ligue 1 title and also played her part in the Champions League final, coming on as an 86th minute final. Thomis will hope she continues to do enough to make France’s squad for Euro 2017. 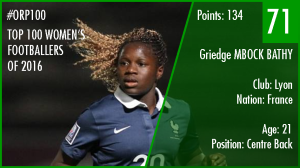 France have certainly found a top young talent to pair alongside Wendie Renard in recent years, as have Ligue 1 champions Lyon. Mbock Bathy is a hugely impressive young defender and at just 21 put herself forward to take Lyon’s fourth penalty in the 2016 Champions League final. With Mbock Bathy set for another big year in 2017, it’s scary to speculate how good the Lyon defender could become when she reaches her peak years and her performances have already seen Saki Kumagai moved to centre midfield at times.