In the eighth piece as we move into the top 25, we take a look at a couple of experienced heads, England’s leader and a Dutch striker everyone’s getting excited about… 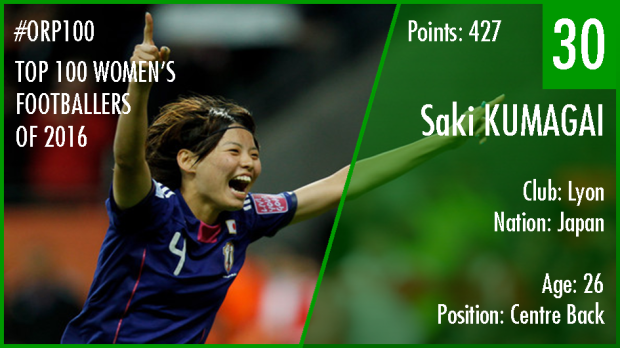 Centre back Saki Kumagai who suffered in 2016 due to Japan’s failure to qualify for the 2016 Rio Olympics. But on domestic business, Kumagai was once again infallible as Lyon defended their Ligue 1 title and beat Wolfsburg to clinch the Champions League. More impressively, it was Kumagai who got the honour of scoring the winning penalty after Sarah Bouhaddi saved Wolfsburg’s last two penalties – the defender also played in midfield during 2016, including the final itself. 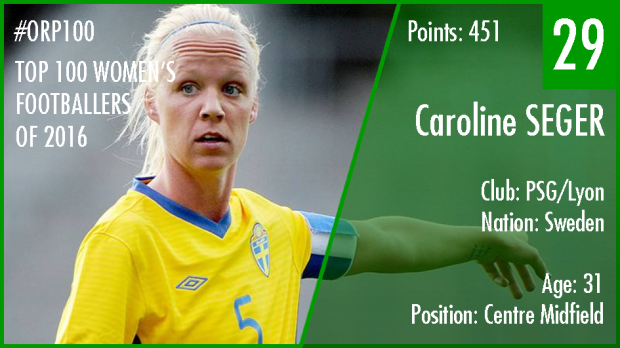 The experienced midfielder made the bold move from one French giant to another when she left PSG for Champions League winners Lyon in the summer. Seger is currently trailing her former club in the Ligue 1 standings but already looks to have a good chance of picking up the Champions League trophy herself in May. At the Olympics, Seger showed her nerve and experience to score in both the quarter-final and semi-final shootouts as she bagged herself an Olympic silver. 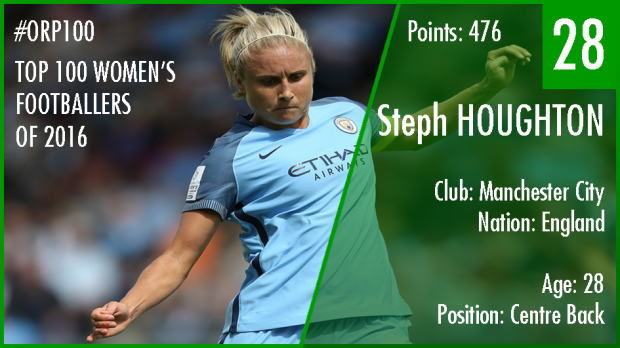 Steph Houghton and Manchester City finally got their hands on the FA WSL trophy at the third time of asking and boy did they do it in style. City went the whole season unbeaten and that was largely down to the fact Houghton and her team mates conceded just four league goals all season—just one from open play. For England, Houghton has also gone the last ten games unbeaten and also picked up the Continental Cup for the second time when City beat Birmingham 1-0 in October’s final. 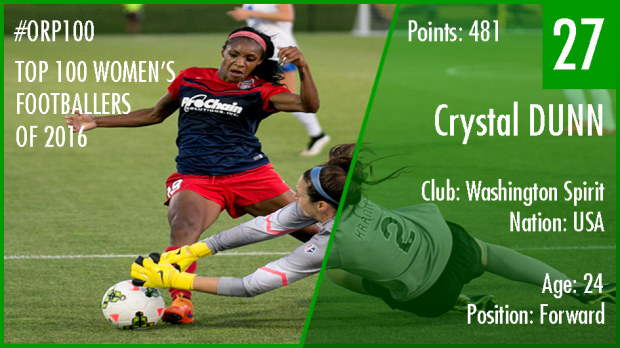 Crystal Dunn had the year of her life in 2016. It started with a superb five goal haul against Puerto Rico for her country but ended with heartbreak as Washington Spirit lost 3-2 to Western New York Flash in the NWSL final. Dunn scored both of Spirit’s goals in the final to go with the five she set up for others during the regular season. Dunn also scored a superb goal against Mark Sampson’s England in the inaugural SheBelieves Cup and was part of the USA squad that went to the Olympics in Rio. Could she be following Alex Morgan to Europe? 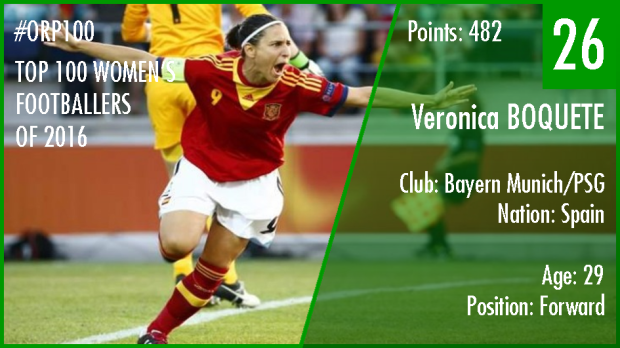 Veronica Boquete was one of several big names to complete big moves half way through 2016. After a successful spell with Bayern Munich which saw her end her career in Germany with a Bundesliga title, Boquete moved on to France with PSG. Her influence seems to have worked, PSG are level with Lyon going into 2017 and it appears the games between the two sides will decide the destiny of this season’s Ligue 1 title. Boquete also helped Spain quality for Euro 2017 where they’ll face both England and Scotland. 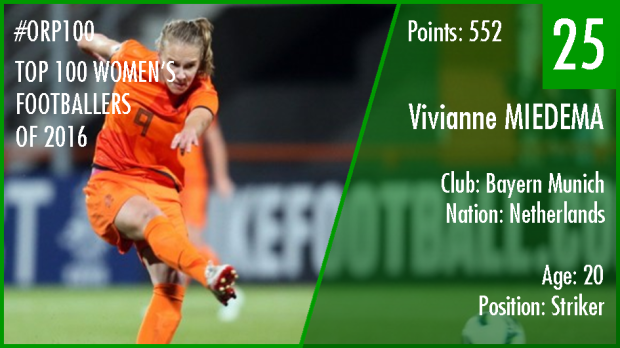 One of a number of young stars to announce themselves during 2016. The 20-year-old played a key role in Bayern Munich’s toppling of Wolfsburg and FFC Frankfurt, scoring 14 goals leaving her only behind Mandy Islacker in the Bundesliga rankings. Miedema already has five goals this season and despite her best efforts, Netherlands didn’t qualify for the Olympics but we’ll certainly see a lot more of Miedema when she leads the line for Netherlands at the Euro’s next year. 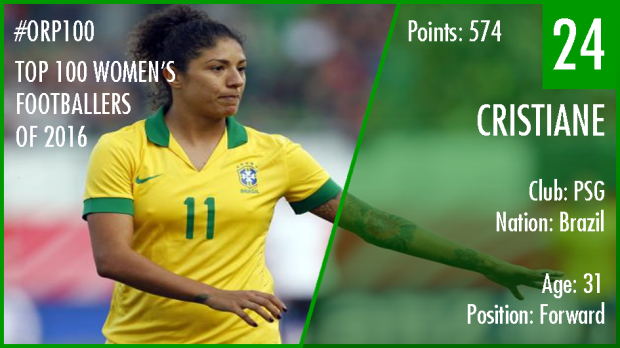 Cristiane certainly provided a mixed bag this year, a largely successful season was tinged when she missed a penalty in the Olympics semi-final shootout against Sweden in Rio. But Cristiane ended the 2015/16 Ligue 1 season with 15 goals, only behind Ada Hegerberg in the rankings and also set six up. Cristiane has already set a further three up during the new campaign and is helping PSG continue to compete with Lyon. 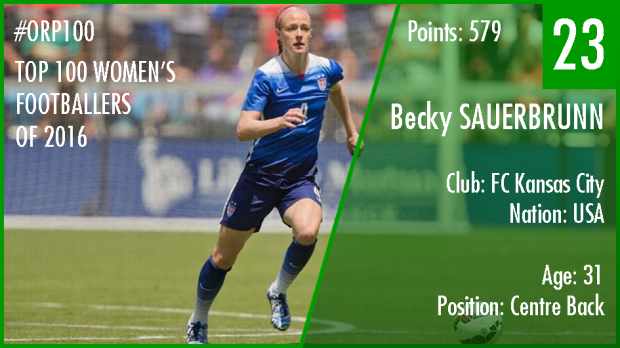 Whilst the experienced centre back will be disappointed with how her season went with FC Kansas City, she hit several personal milestones whilst representing the USA during the course of 2016. Sauerbrunn was handed joint captaincy for her country at the start of the year, received her 100th cap against Canada and was once again a vital part of the USA team that competed in Rio during the summer. 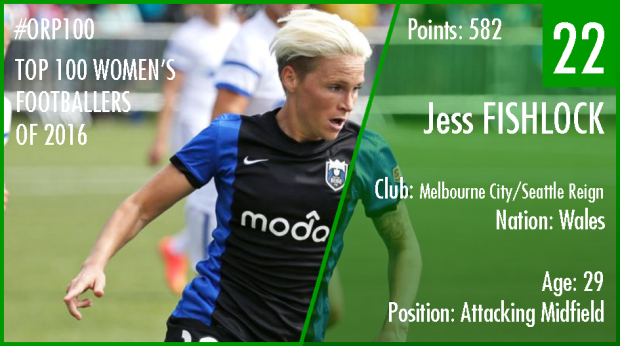 The Welsh wizard was once again at her brilliant best in 2016, Fishlock was part of the Melbourne City side that won 12 out of 12 in the W-League at the start of the year before returning to Seattle and pushing herself up the assists league with four during the course of the season. Whilst Seattle failed to build on an impressive 2015, Fishlock was once again one of the standout players and with Kim Little departing she may take on an even bigger role when the NWSL gets underway again next year. 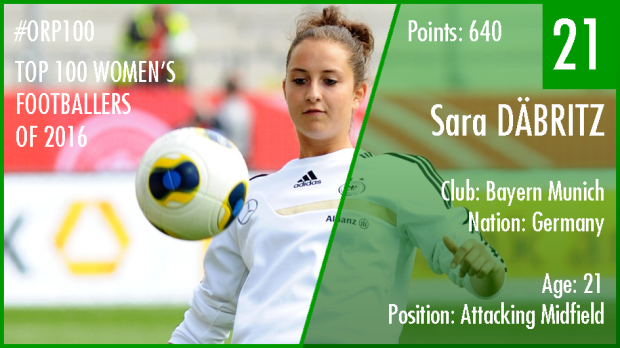 Another youngster who had a superb 2016. Sara Dabritz won the Bundesliga with Bayern Munich and an Olympic gold medal with her country whilst only just out of her teenage years. Dabritz contributed plenty of goals for her club and also managed three goals at the Olympics for her country, including an important strike in the semi-final against John Herdman’s Canada. Dabritz is another we’ll hear much more about for years to come.