In the fifth and final piece of the week before a short weekend break, we take a look at someone who made their England bow in 2016, two classy USWNT veterans and a French international who worked her way back into the reckoning…

Mandy Islacker has been one of the form strikers in Europe over the past 18 months but you wouldn’t know it based on her international recognition. Islacker scored two in a recent friendly against the Netherlands and picked up a gold medal in Rio but wasn’t deemed worthy of a start in the final against Sweden. Despite that, Islacker ended last season as the top scorer in the Bundesliga with 17 goals and is already topping the rankings again this year with 7. Clinical. 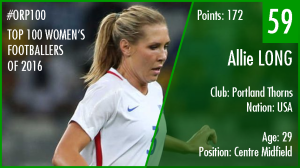 Allie Long’s never been one of the ‘big’ names of the USWNT but her performances during 2016 have earned her a rightful place on our list. Six goals from midfield for Portland Thorns helped her pick up the NWSL Shield and Long also bagged a couple of goals for her country during the year and also represented the USA at the 2016 Rio Olympics. All in all, another solid year for a very understated and talented player with plenty more to offer. 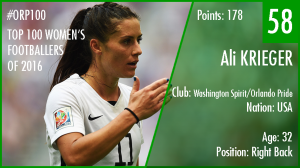 2016 was certainly a mixed one for the experienced USA international. The 32-year-old cemented her spot in the Washington Spirit team, scoring in the semi-final as Spirit made the NWSL final, only to miss the first penalty in the final as Western New York Flash walked away for the glory. For the USA, Krieger was regularly dropped in favour of Sky Blue’s Kelley O’Hara but still played her part at the Rio Olympics. Krieger’s year ended with a much anticipated trade to Orlando Pride where she’ll spend the 2017 season. 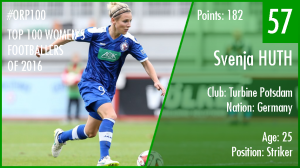 Given the amount of attacking talent in the Germany squad, it’s no surprise Huth has struggled to hold down a regular place but it also shows how strong that talent must be. Huth has been in superb form for Turbine Potsdam and was rewarded with a spot in Germany’s Olympics squad, bagging herself a gold medal to go with it. Huth has plenty of goals already this season as Potsdam chase Bayern Munich and will be hoping to soon replicate her club form for Germany.

Joining Seattle Reign in January, Melis promptly retired from international duty as the Netherlands’ top ever goal scorer in March and was rewarded with seven goals despite the Reign’s failure to make the end of season play-offs. Despite 59 international goals, Melis won’t represent her country at the Euro’s next year and this will be her one and only appearance on this list. The 30-year-old recently announced her retirement from playing completely.

English attacker Rachel Daly was always going to be one of the early picks but not many could foresee the impact she’d have on Houston’s team early in the season. Despite the Dash’s struggles for consistency, Daly—along with Kealia Ohai—was a shining light for Houston and her form in the NWSL saw her become a regular member of Mark Sampson’s England squad by the end of the year. A goal on her debut against Serbia has done her chances of making the Euro’s no harm at all!

2016 was another virtuoso year for classy attacking midfielder Jordan Nobbs. A string of impressive performances for her country saw her voted England’s Player of the Year last month and she continued to impress with Arsenal. Nobbs had a couple of goal of the season worthy strikes in her armoury during the FA WSL season and also got her hands back on the FA Cup as Arsenal defeated Chelsea at Wembley in May. 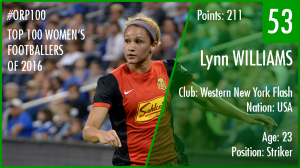 Along with her fellow international debutant Kealia Ohai, Lynn Williams scored 11 goals during the 2016 NWSL season and got the biggest prize of all to go with it—the NWSL title. Whilst the Flash only finished fourth in the league, they beat Portland Thorns and Washington Spirit and Williams also registered five assists to go with her 11 goals. The 23-year-old topped off a superb year with a goal just 49 seconds into her USA debut in a friendly against Switzerland. 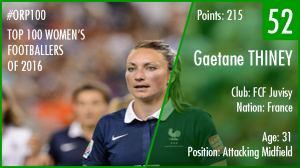 Gaetane Thiney must be one of the few regular French internationals to have not played for Lyon or PSG. The Juvisy attacker/midfielder has been at the club since 2008 and has regularly double figures for Juvisy over the years. But in 2016 for Thiney it was all about France. New boss Olivier Echouafni recalled Thiney to the squad after Philippe Bergeroo left her out of the Olympics but Thiney continues to divide opinion among fans.

Tabea Kemme’s career has been helped not just by her raw talent, but her ability to play in several positions. Used for her club and country predominantly as a full back, Kemme has been a regular at the World Cup and Olympics as Germany won gold this summer. With an eye for a long range goal, Kemme has thrived domestically for Turbine Potsdam and will surely reach Bayern Munich or Wolfsburg level eventually as she reaches her peak.