In the final countdown of our Top 100, we take look at the best 10 footballers on the planet in 2016. It includes an England international who became one of the best in her position this year, a timeless Brazilian still providing magical moments and the No.1 herself, a quite brilliant Norwegian star… 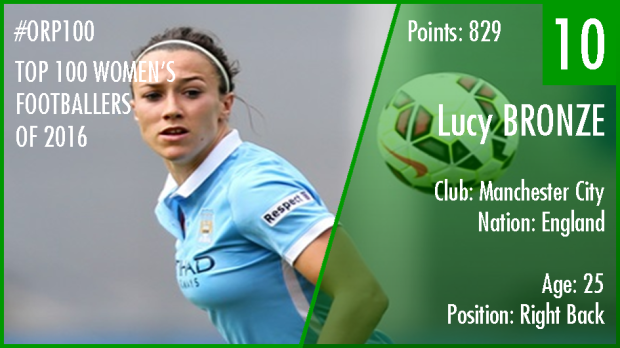 The unbeatable (quite literally) Lucy Bronze has installed herself as one of the best defenders in the game during 2016. Very few full-backs in the world right now are as effective both defensively and offensively as Bronze is and she’s played a huge part in  Manchester City’s success. Nick Cushing’s side didn’t lose a league match all season and Bronze even chipped in with crucial goals in the Champions League and the winner deep into extra-time of the Continental Cup final. Not only is she a key part of City’s watertight defence, she’s also one of their key players going forward and at just 25 Bronze has even more to give in the future. 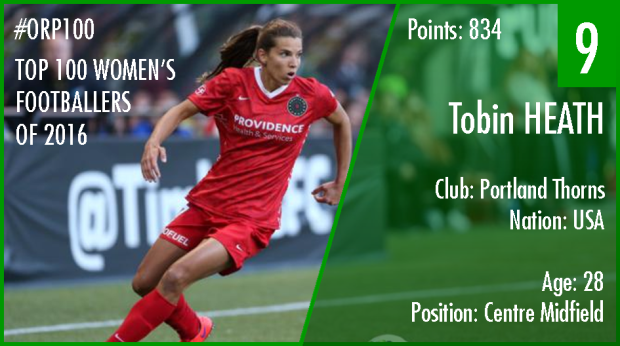 Tobin Heath’s early career was somewhat of a slow burner, moving around from team to team before moving to France and PSG in 2012. Once the NWSL came to light in 2013, Heath was allocated to Portland Thorns and scored the championship clinching goal to propel her into the limelight. In 2016, Heath started the season with five assists in as many games and eventually broke the record for assists in a single season. Heath took over captaincy whilst Christine Sinclair was injured and was also one of USA’s best players at the 2016 summer Olympics.

It was another vintage season for the giant centre back Wendie Renard. Ligue 1? Tick. Champions League? Tick. Score a penalty in the final? Tick. Captain your country at an Olympic Games? Tick. Renard was as ever at her indomitable best during 2016, playing a huge part in Lyon’s season treble and representing her country in Rio. She stepped up under pressure to score a penalty in the shootout against Wolfsburg although rumours do persist that Renard may fancy a new challenge elsewhere for 2017.

It was always going to be hard to build on 2015 for last year’s Ballon d’Or winner. Lloyd’s stunning first half hat-trick in the World Cup ensured everyone was talking about her going into 2016 but the 34-year-old continued to show moments of brilliance. Her sensational strike against Switzerland in a friendly gained plenty of attention but her NWSL form dipped with Houston struggling for consistency throughout the season. Despite that, Lloyd still managed five goals and three assists and was only outshone by the brilliant Kealia Ohai.

What more is there to say about the superb Christine Sinclair? At 33, Sinclair is the oldest player in our top ten but her age certainly hasn’t dimmed her quality. Sinclair managed six goals as Portland Thorns won the NWSL Shield and moved into 2nd place on the all-time international goal scorers list, now just 19 behind USA legend Abby Wambach. Sinclair’s constant importance to her club and country has been magnified in recent years and one wonders just how long she can continue defying the odds.

Despite being just 24, if it feels like Dzsenifer Marozsan has been around forever it’s because she made her Bundesliga debut at just a staggering 14 years old. Marozsan scored the decisive goal as Germany struck gold at the 2016 Rio Olympics and was rewarded with the captaincy by new Head Coach Steffi Jones in October. With Lotta Schelin and Amandine Henry departing Lyon in the summer, it was no surprise the French giants turned to Marozsan as a solution and lured her away from FFC Frankfurt. With her peak yet to come and playing for the best side in Europe, Marozsan’s career is only going to go from strength to strength. 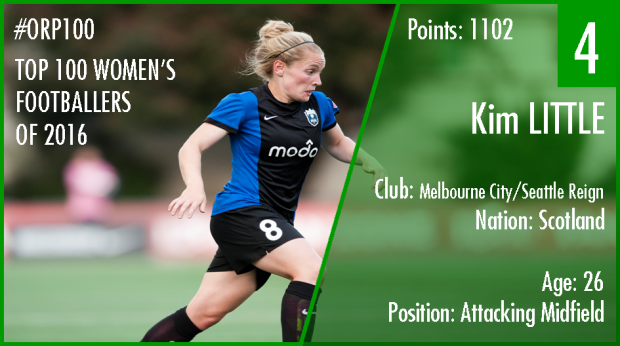 Oh how Scotland must yearn to see a male footballer so high up such a ranking. Attacking midfielder Kim Little enhanced her reputation as one of the best around during a 2016 which saw Seattle Reign struggle with key injuries and lose their grip on the NWSL title. Despite missing out on the play-offs, Little returned from a loan spell in Australia in top form and ended the season with six goals from midfield. In October, it was announced Little would return to England with her former club Arsenal for 2017 and beyond. Exciting times for everyone involved with the FA WSL.

Nobody contributed more to Germany’s Olympic gold medal than 31-year-old Behringer, the midfielder out on her own as top scorer of the tournament with five goals that included strikes in both quarter-final and semi-final. Doing more than enough with Bayern Munich to earn a contract extension through to 2019, Behringer was a key part of a Bayern side that held onto its Bundesliga title with an impressive ten point gap over a strong Wolfsburg side that had reached the Champions League final.

It feels like the magical Marta has been around forever but the Brazilian superstar actually only just turned 30 at the start of 2016. Off the back of becoming the all-time top scorer in the Women’s World Cup last year, Marta started the season off injured but once again shone in a FC Rosengård side that actually lost their title to Linkopings this season. Marta still managed 13 goals during the 2016 Damallsvenskan campaign and after only just moving the other side of 30, the Brazilian still has a lot to offer her adoring fans moving  forward into 2017 and beyond.

After being voted the best player in Europe back in August, people were left aghast when Hegerberg was left off the Ballon d’Or shortlist, likely due to Norway’s lack of participation in the 2016 summer Olympics. Even so, the 21-year-old was once more at her brilliant best in 2016, scoring 33 goals as Lyon clinched their tenth successive Ligue 1 title, the Coupe de France and the Champions League on penalties. Altogether, Hegerberg scored an incredible 54 goals in 35 matches for Lyon during the 2015-16 season and has also continued to shine with Norway. A worthy No.1!